Hebron is a community important to Christians, Muslims and Jews

Osama (last name withheld) is a licensed Palestinian tour guide. He recently stood with one of his tour groups in the Ibrahimi mosque in Hebron with his head bowed and his expression troubled as a group of Israeli Jewish tourists walked through. The last person in line was an Israeli guard carrying a machine gun. It is a traditional sign of respect for visitors of any faith to remove their shoes and for women to cover their heads. This group had done neither. “No respect,” he said quietly. “No respect.”

The 2,000-year-old mosque is built over a cave. It is believed that Abraham and Sarah, Isaac and Rebecca, and Jacob and Leah are buried there. It is a holy place for Muslims, Christians and Jews. 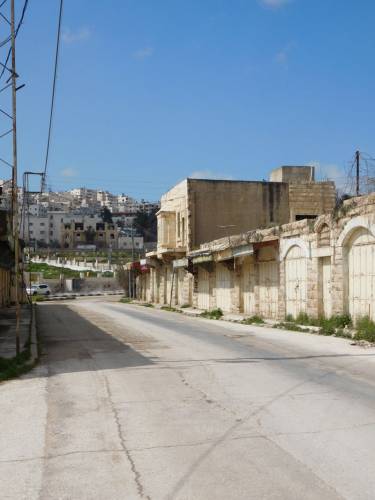 A view of Shuhada Street in Hebron, once a thriving market. (Photo by Kathy Melvin)

After the Israeli occupation of the West Bank in 1967, Jewish settlements were established in and around Hebron. Their expansion and protection by Israeli troops has received government support. In 1969, Rabbi Moshe Levinger rented a room in a hotel in Hebron for two days to celebrate Passover, but his group refused to leave. The Knesset (Israeli Parliament) approved the Kiryat Arba settlement in 1970. About 7,500 Jewish settlers live there now. According to international law and the fourth Geneva Convention, all Israeli settlements in the West Bank are illegal.

Hebron changed on Feb. 25, 1994, when Israeli settler and American Jew Baruch Goldstein killed 29 Muslim worshipers at the mosque and injured more than 120. Surviving worshipers killed Goldstein and riots broke out around the city. In a 1997 agreement, Hebron was divided into areas of Palestinian and Israeli control; the Ibrahimi mosque was also divided and a synagogue was constructed in the other half. There were once seven access points for worshipers, but today two remain. The once-thriving Shuhada street, home to markets, shops and vendors, is now a ghost town. 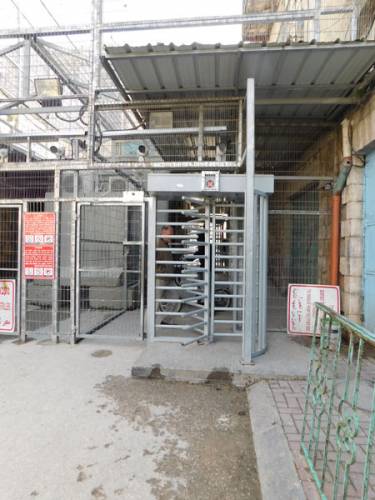 The Israeli-manned and armed checkpoint to enter area H2. (Photo by Kathy Melvin)

When Osama’s tour group wanted to walk down Shuhada Street, he had to tell them he could not accompany them and would meet them again on the other side.

There is a campaign to open Shuhada Street, organized by the Youth Against Settlements (YAS), a nonviolent campaign to protest closure and separation in Hebron. The campaign calls for the implementation of international law, the guarantee of human rights and end of the Israeli occupation of the Palestinian territory.

In 2006, the residents of more than 1,000 Palestinian housing units had left their homes. More than 1,800 Palestinian businesses had closed either by military order or from the pressure of the separation measures. Palestinian children and their teachers who attend school must pass through Israeli-manned and armed checkpoints in order to get to their buildings. They’re sometimes questioned or not allowed to pass at all. 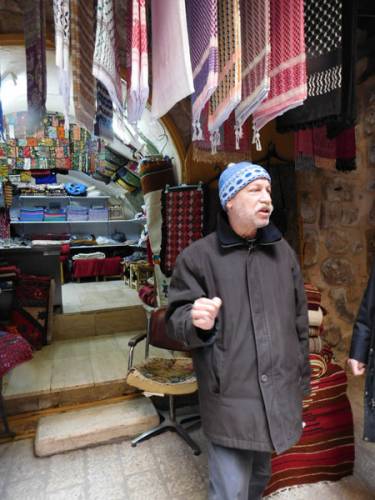 A Hebron market owner tells visitors he wants to tell his story of deprivation and degradation in the hope they’ll return home and tell others. (Photo by Kathy Melvin)

Osama met his group near the Palestinian market, which was covered by wire mesh to protect the shopkeepers. One man emerged from his shop to talk to the group.

“Please, you don’t have to buy anything,” he said. “I just want to tell you our story and then I hope you will go home and tell others.” Right above the market is a large Jewish settlement. He said the wire mesh is there because settlers throw rocks and garbage on the shops below.

“We only want to live in peace,” he said, “but peace is not possible when one group is the master and the other are the slaves.”

Dear God, we pray that all people would share in the abundance of your good creation. We pray that you make us your disciples pursuing justice and spreading your love throughout all of creation. In Jesus’ name, we pray. Amen.