A captivating talk on captivity

Bolivian immigrant now works for program that ministered to her 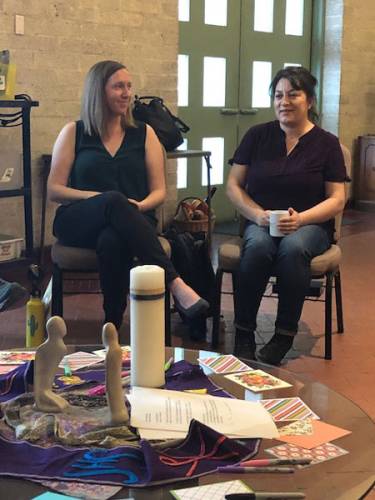 Rocio Calderon, right, shared her story with a Presbyterian Mission Agency delegation. Interpreting for her was the Rev. Elizabeth Toland Smith. (Photo by José Luis Casal)

Calderon, who grew up in Bolivia, was locked away in a U.S. detention center for two years even after being economically exploited by an employer. One thing that kept her going, she said, was the compassion of the Casa Mariposa Detention Visitation Program, which encouraged her through cards and visits.

“It was a relief to see someone who would take time to come visit so I didn’t feel so alone,” she said. People would speak with her attorney and ask her how her case was going. “They would write and say they’re praying for me, and I thought: How great that someone’s praying for me!”

Now not only is she a part-time cook, she also works for the same program that helped her through her own incarceration. “Now I am around people who transmit a lot of trust,” she said, including people who support detainees from countries outside Latin America, including Russia, China and African nations.

After her talk, her interpreter, the Rev. Elizabeth Toland Smith, provided cards for the visitors to write their own encouraging messages to people in detention.

The effort made Calderon smile.

“I have all mine saved,” she said of the many cards people sent her. “We know the people who receive these letters will feel the same way.”

Smith’s husband, the Rev. Bart Smith, pastor of St. Mark’s Presbyterian Church in Tucson, said members “are passionate about following Jesus for the common good.” Last year the church, which has about 200 members, decided to open its doors to people from Central America’s Northern Triangle who were fleeing violence and extreme poverty. One week each month, the church houses families – up to about 70 people at a time – seeking asylum in the U.S. They call the transitional housing the Hotel San Marcos. 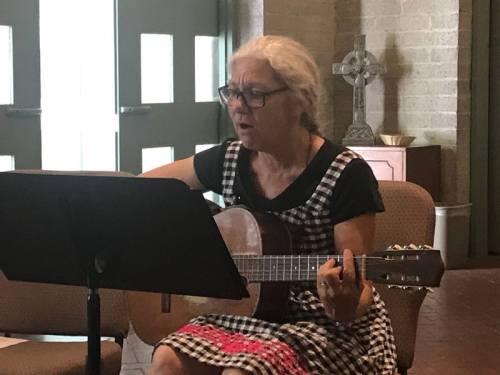 Smith says the welcome is part of the church’s “longstanding commitment to living out the nearness of God’s reign.”

“Our strongest witness is being human in a dehumanizing situation, meeting Christ in other people,” he said.

That evening the delegation, which was traveling the U.S. southern border, was hosted by Northminster Presbyterian Church, a church that welcomes African immigrants and their service, in some cases, as ruling elders and deacons.

“They are here because they would be dead if they weren’t here,” said Bonnie Thompson, a Northminster member.

The Northminster church also hosts the Middle Eastern Presbyterian Fellowship, which holds services in Arabic. Its pastor, the Rev. George Bitar, said the congregation started “as people who came here as refugees.” One of his earliest tasks was visiting Tucson-area employers, seeking jobs for some of his congregants.

“We are doing the job the Lord asked us to do,” he said, calling it “a joy that we have this church called the Middle Eastern Presbyterian Fellowship.”

Brad Munroe, who’s pastor to both de Cristo and Grand Canyon presbyteries, called the level of violence from which immigrants seek to escape “visceral.” More reporting is needed on the violence, he said, but “it would get a hard R if not an X rating.”

A joy serving both presbyteries is that “I get to interact with socially progressive and more socially conservative” congregations, he said. “Some will do things that are against U.S. law without blinking, with no pushback. Other churches, if it conforms to U.S. law, they are all in, and they see this as a mission of compassion.”

He said he’s seen the discussion move from “caricature to conversation, and then from conversation to dialogue with depth.”

“I believe we need to be more direct and more intentional about sharing what we have learned from immigrant communities,” said the Rev. José Luis Casal, director of World Mission. “This is important for America, to say that we can learn. If we can help with this, let’s try to do it.”

God, fill our lives with courage to live with hope in a hopeless world. Revitalize your church so that many people might see a new dawn! Amen.