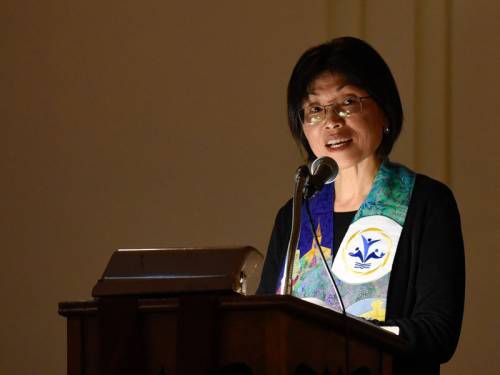 Ruling Elder JyungIn “Jenny” Lee preaches at Church of the Covenant in New York City prior to the 63rd Commission on the Status of Women at the United Nations nearby. (Photo by Rich Copley)

She had come to an office event with japchae, a popular Korean stir-fry dish of glass noodles, vegetables and mushrooms, sometimes including meat. Because of the arduous process of cooking japchae, Lee explained, it was often the last dish people signed up for at potlucks.

But she had made it and was faced with a colleague who said he made japchae in 15 minutes, far less than the couple of hours it took her and most people she knew to make the dish.

“I asked him, ‘Tell me how you make it?’ ” Lee recalled. “He said, ‘Chop up the ingredients and put them all together in a large wok. Put in some oil, ingredients, stir-fry and eat. Simple.’

Lee wove the anecdote into a sermon she preached recently at Church of the Covenant, a New York City Presbyterian Church (U.S.A.) congregation just a block northwest of the United Nations, where the 63rd  Commission on the Status of Women was  about to get underway. Lee served as a delegate this year as the new moderator of Presbyterian Women,  which just became an accredited nongovernmental organization at the UN.

Preaching from 1 Corinthians 12:12–27, in which the Apostle Paul talks about the importance of each part of the body to make the whole, Lee put a distinct cultural spin on the Scripture about gifts and using them together for a greater good.

The Scripture reads, in part:

“What would japchae be without spinach?” Lee asked. “Spinach, you are important. Don’t be downcast because you are not carrot. Shiitake mushrooms — any japchae without shiitake mushrooms would just be a mundane mix of carrots, onions and spinach.”

Lee, the first Korean moderator of Presbyterian Women, added, “Church is like japchae, where unique people come together blended with the Spirit and offered for the world to enjoy. Otherwise, the church would be french fries, where everyone is uniform in color, shape and flavor — no offense to french fries.”

Concluding her sermon, Lee turned from Paul to another great leader of faith to bring her point home.

Father, thanks for the joy we share as your children, in all our diversity, knowing that we are united in your love. Grant us grace to embrace your blessings as we journey with others in this amazing adventure of life. Amen.