A necessity becomes an outreach blessing for a rural community 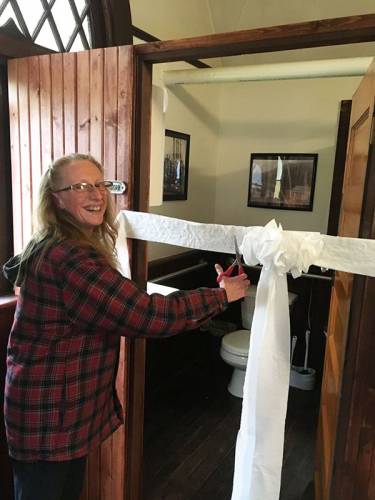 For the first time in its 120-year history, Endeavor Presbyterian Church in the Presbytery of Lake Erie has running water. Yes, you read that correctly. Running water.

“This church is in a rural area,” said Roger Snyder, a commissioned lay pastor in the presbytery. “I’ve heard it said that it’s five miles past the edge of civilization.” Indeed, the church is tucked away from the hustle and bustle of city living, nestled in Endeavor, Pennsylvania, along the Allegheny National Forest.

“Installing the restroom was a big deal for our area,” Snyder said. “The idea of being able to worship as a church family is an element sorely needed in our area. The idea of not being able to use a restroom for an hour and a half is prohibitive to some sharing in worship.”

Initially, Snyder says, he was thinking of the congregation’s aging population, but he also realized that indoor plumbing would be a blessing for parents with young children as well. As the church grew from “the faithful five,” it was decided to first invest in a port-a-potty.

“Some laugh, but one new [previously unchurched] family had a 1-year-old who would say, ‘Take me to the stink house, Grandpa!’ We were glad it was there for her,” Snyder said.

In March 2017, the decision was made to install indoor plumbing. Despite the relative ease of installing pipes in structures these days, the process for bringing running water to Endeavor Presbyterian Church was not simple. There was the question of funding.

“A mere year and a half ago, the church only had enough finances to last a couple of more years,” Snyder said.

However, a growing congregation created a better cash flow for the church. Still, the church wanted to install the plumbing without lingering debt. Since they were also interested in making the building accessible for wheelchairs, Snyder reached out to the Presbytery of Lake Erie’s general presbyter, David Oyler, to see what renovation funds were available. Oyler called the Rev. Sue Montgomery, who retired from Nickelville Presbyterian Church in Emlenton, Pennsylvania, in 2017, and who now serves as a disability consultant. Montgomery had been contacted by Swissvale Presbyterian Church in Pittsburgh. Swissvale had received some money from a long-time member who was adamant about using it to encourage people to attend worship. Montgomery told Swissvale about Endeavor’s need for indoor plumbing.

“Swissvale Presbyterian ended up sending us a check that covered half of our expenses,” Snyder said.

Various fundraisers were held to help cover the remaining costs.

“We had an opportunity to buy apparel with the church logo as a fundraiser,” Snyder said. “A friend who works for a printing company developed a logo based on a stained-glass window in our church. Not only did this raise money, but soon the sense of mission became a community involvement — a source of conversation at the local stores and the beauty shop.”

A community spaghetti supper was also organized by a high-school senior for his service project. Originally hoping for 30 to 50 dinners to be purchased, the congregation had 200 people turn out, buying 300 meals.

“The people preparing the meal had to keep running to the neighboring towns to buy out their supplies of noodles and sauce,” Snyder said. “There was a real sense of getting together as a community.”

“We are the first church in our neighborhood of three churches that actually has running water,” Snyder said.

The accomplishment, though, is more than just having the convenience of running water.

Snyder reflects on the time he was in a dark, damp, spider-infested crawl space — not an easy thing for a claustrophobic pastor. He was with two helpers.

“Both had family members in our books dating back to the early 1900s. Neither had been to this church for years. I mentioned that they both had relatives looking down and were satisfied that they were keeping this church family active for another generation,” Snyder said. “The smile on their faces brought goosebumps. People are genuinely happy and satisfied when we do what God wants us to do.”

Snyder added, “In this day of electronics and several cars per family, there is a developing need for people spending real time together.”

Endeavor Presbyterian’s project continues to enable the church “to be a vessel in which people come together in common mission.”

“For our sleepy little community, which has gradually withdrawn from neighbors in the context of modern times, this was like ringing a bell. God is alive, well and active right next to you,” Snyder said, adding, “God’s faithfulness in bringing together financing and the necessary help has been a huge testimony of God’s love and provisions for Endeavor and the neighboring communities.”

God of grace, we trust in your provision for us and all creatures. Help us answer your call to be faithful stewards of creation. Amen.