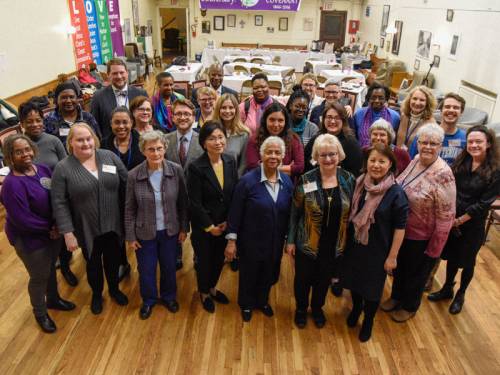 The Presbyterian delegation to the 2019 United Nations Commission on the Status of Women. (Photo by Rich Copley)

The Presbyterian Ministry at the United Nations welcomed the church’s 2019 delegation to the UN Commission on the Status of Women by celebrating Presbyterian Women’s new status as a nongovernmental organization accredited by the UN.

“This is our first year welcoming a joint delegation of PW and PC(USA),” UN ministry Director Ryan Smith said during the orientation session at New York City’s Church of the Covenant, just a block northwest of the United Nations on 42nd Street.

Joy Durrant, vice-moderator for justice and peace concerns for Presbyterian Women, said the NGO status had been eight years in the making, from the time the group learned it could apply for that status to acceptance.

“It was a big surprise in July when we received a letter saying we had been granted NGO status,” Durrant said, reflecting on the three-year application process. “We are excited to start this new partnership and this new chapter for Presbyterian Women.”

The status expands Presbyterian opportunities for participation in the annual commission, which Smith describes as “the gender-norm setting meeting for the world for the year. They have a theme every year, and they work to create the outcome document, or what is called the agreed conclusion, and that is where countries of the world say, yes, we agree, this is what we should be doing for women, on this topic, over the next three or four years.” 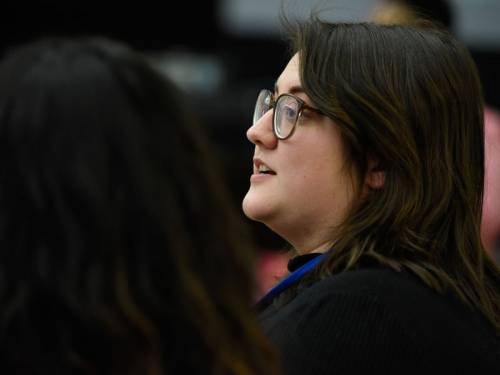 Anna Hand of Ellsworth, Kansas was attending the Commission on the Status of Women for the first time. (Photo by Rich Copley)

“I grew up in very rural Western Kansas, where people don’t think global issues touch them,” Anna Hand, a 25-year-old engineering student from Ellsworth, Kansas, said over lunch before the orientation. “I saw a Facebook post about this and said, ‘I should do this. I should at least apply.’ ”

She said she was particularly interested in engaging with issues that impact women in rural communities, such as domestic violence and access to health care, as well as women in STEM fields.

“I thought I could have a voice, share my story and try to bring these issues back home,” said Hand, who is a deacon at her church, First Presbyterian Church of Ellsworth.

Madison McKinney, 20, said she appreciates that the Presbyterian Church allows her to practice her faith as well as participate in her Native American culture. She is an enrolled member of the Sisseton Wahpeton Dakota Oyate Tribe and the Choctaw Nation of Oklahoma.

At the opening worship, she joined the Rev. Dr. Rhashell D. Hunter, director of Racial Equity & Women’s Intercultural Ministries for the Presbyterian Mission Agency, for the acknowledgement of whose land the orientation was taking place on, now a standard part of meetings held by the national church. 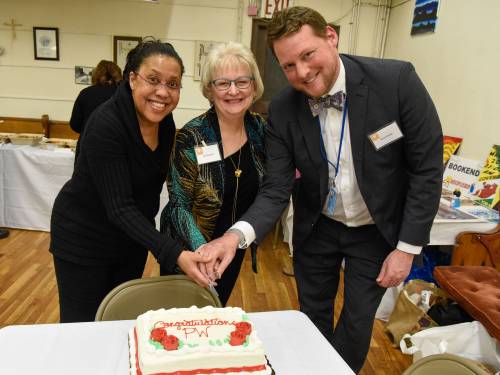 McKinney, an elder at First Presbyterian Church in Lawrence, Kansas, told the delegation the church site was on the land of the Lenape Tribe, also called the Lenni-Lenape, Lenape and Delaware, whose territory included parts Pennsylvania, New Jersey, New York City, Long Island and the Lower Hudson Valley.

After a gathering and registration time where songs ranging from Katy Perry’s “Roar” to Aretha Franklin’s “Respect” played in the background, the opening worship included the nearly 20-person delegation singing “For Everyone Born,” followed by racial justice training by the Rev. Shanea Leonard.

During dinner, catered by Eat Offbeat, a business created by refugees and serving food native to their cultures, PC(USA) Mission Engagement and Support Senior Director Rosemary Mitchell talked to the delegation about giving, which she said is second nature to Presbyterian Women.

The Peace & Global Witness Special Offering, in particular, supports the work of the Presbyterian Ministry at the United Nations.

Today’s Focus:   UN Commission on the Status of Women

Gracious God, thank you for those whose dedication and generosity make life better for those throughout the world. May your Holy Spirit guide and strengthen them to your glory. In Jesus Christ. Amen.