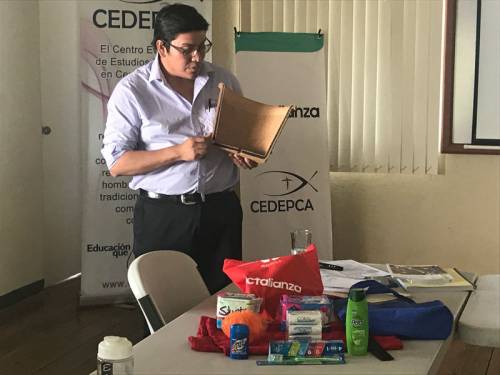 Up against some appalling facts — 119 Guatemalan women each day report a violent attack against them and nearly 62,000 women and girls 19 and under became pregnant during the first six months of 2018, many of them the result of rape — CEDEPCA, a longtime partner of the Presbyterian Church (U.S.A.), was determined to empower girls in a new way.

That innovation, a Presbyterian Mission Agency delegation found out at CEDEPCA’s Guatemala City compound, is called Project Tamar, named for the biblical daughter of King David who was raped by her half-brother.

Begun with a 2016 seed grant from Presbyterian Women, the 1½-day retreats are, for many girls, the first time they’ve ever slept alone in a bed and the first time someone else has served them food, said Pamela Liquez of CEDEPCA’s Women’s Ministry.

“We really believe education transforms,” she said, adding that CEDEPCA wants women and girls to live free from violence.

A course on healthy relationships called “It’s Marvelous to be a Woman” teaches girls and young women that they, like boys, are created in the image and likeness of God.

“That’s news to many women. They haven’t heard that before,” Liquez said. “They were taught that men were created in the image of God, and women from a man’s rib. This is eye-opening, because it helps to re-dignify women’s image.”

Begun in 1982 and funded by a number of Presbyterian churches and mid councils in the U.S. as well as Presbyterian World Mission and CEDEPCA USA, CEDEPCA is an educational center that provides safe, accepting, creative spaces where women and men from different Christian traditions can deepen their faith while strengthening their ability to confront the key issues facing their community. On a budget of about $600,000, CEDEPCA last year served about 36,000 people with humanitarian aid, psychosocial support, courses, workshops and other services.

CEDEPCA is a Spanish-language acronym for Protestant Center for Pastoral Studies in Central America.

“Women in Central America and Mexico live in a patriarchal, violent and oppressive system at all socioeconomic levels,” said Judith Castañeda, CEDEPCA’s general coordinator. “Central America is fragile, and Guatemala is one of the most vulnerable countries.”

The region also has been vulnerable to natural disasters. CEDEPCA risk managers help communities make contingency plans and create early warning systems. In areas where cellphones aren’t widespread, villagers have been known to warn one another of impending nasty weather by banging pots and pans with a spoon or by blowing a whistle throughout their neighborhood. “We use whatever they have available to them,” said Luis Sarpec, CEDEPCA’s facilitator for risk management. “They can do it with the materials they have.”

CEDEPCA also helps those they serve develop psychological reserves, says Ana Paxtor, the organization’s facilitator for psychosocial care.  “We help them get to know their emotional capacity and resilience,” she said.

The organization welcomes and arranges week-long visits by congregations in the U.S. and Canada. This year 27 groups are scheduled for an immersive visit to experience the topic of their choice, including, for example, the environment or gender issues.

Loving God, we pray for all who are suffering. And we pray for our church, that our words and our actions may embody your justice, joy, and love in our hurting world. In Christ’s name. Amen.