Where are the multicultural stories of giving?

A quick search on the internet leads to countless facts about shifting American diversity. For example, in 2007, Rodríguez and García joined the top 10 list of most popular last names in the United States. And, according to the U.S. Census Bureau, beginning in 2030, the country will grow more by international migration than birth within its borders. 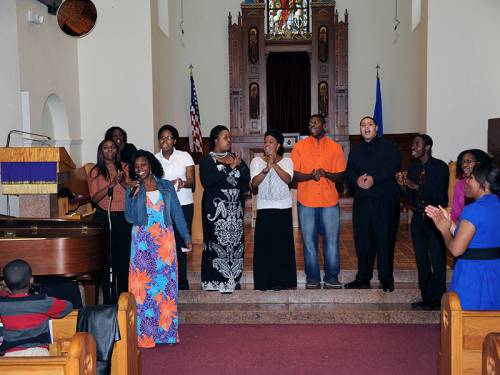 As a former vice moderator of the General Assembly, I’ve observed that these national statistics are parallel with the Presbyterian Church (U.S.A.)’s predominantly white demographics, historically hovering at over 90 percent throughout the denomination’s history. More often than not, this fact is placed in a conversation about how the church must catch up to the world outside of our walls if we want to “survive” (prioritizing mere existence before spiritual thriving).

Antiracism training and book discussions about racism and white supremacy have been taken up by congregations, mid councils and the national agencies of the Church. This illustrates a willingness to dig deeper into the cracks of American society and explore how our faith calls us to engage differently in the neighborhoods, communities and systems around us.

Unfortunately, too often an initial response is to swing open the sanctuary doors, welcoming others inside while neglecting the internal change necessary to honor all members of the body. Such false hospitality emphasizes a desire to look different but not change the substance of how we live together as people of faith. A commitment to dismantle systems of oppression must recognize that there are implicit assumptions and biases regularly at work within the church community.

Such intentional work includes addressing the false belief that every person in the pew understands giving and stewardship in the same way. A white-dominated approach to money and fundraising is often assumed to be the norm, even within multicultural or multiethnic contexts. For example, unlike within the United States, several international mainline denominational governing bodies directly fund local churches. When individuals come to this country, their understanding of congregational funding is different. Yet they are thrust directly into the traditional model of stewardship seasons and pledging.

Moreover, much of the stewardship literature from mainline denominations lacks qualitative and quantitative data from communities of color. As a result, individuals and communities of color are at a disadvantage when accessing the resources necessary to fulfill their unique calling in the world. Dismantling systems of racism and oppression requires us to consider these questions:

A hemorrhaging woman approached Jesus in the midst of a bustling crowd with one thought: “If I just touch him, I will be healed.” She had suffered for 12 years until this one hope-filled, desperate touch of Christ’s cloak immediately stopped her bleeding. Neither she nor the disciples expected Jesus to stop and ask who had touched him, as if the pressing throng could result in a clear response. Falling to her knees before Christ, the woman told the truth. Do you think she spoke of the countless doctors who took her money without offering physical relief? Do you think she spoke of the many days she cried as she yearned for an embrace or even just the compassionate gaze of a passerby? Would she have looked Jesus in the eye, daring him to take back the healing that had opened a whole new future for her?

I’m guessing that much of the crowd was not ready for the truth proclaimed from the woman’s mouth that day, but it was the exact inoculation to heal a community that had forgotten what their faith required. If the Presbyterian Church (U.S.A.) readies itself to hear the full truth from people of color, the church will be transformed and renewed for ministry.