Come and see what God has done: he is awesome in his deeds among mortals. He turned the sea into dry land; they passed through the river on foot. There we rejoiced in him, who rules by his might forever, whose eyes keep watch on the nations — let the rebellious not exalt themselves. (Psalm 66:5–7; NRSV) 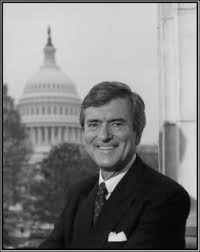 On June 5, the Rev. Dr. Lloyd John Ogilvie completed his baptism at 88 years old and passed into the hands of his loving Savior. Known for many accomplishments in his life, not the least of which was his 23 years as pastor of First Presbyterian Church of Hollywood in Los Angeles, Ogilvie was perhaps best known for his time serving as chaplain of the Senate from 1995 to 2003.

Chaplain Ogilvie’s successor, Barry Black, remembered him in the opening prayer for the Senate on June 10, giving thanks to God for using Ogilvie to “bring deliverance to captives, to restore sight to the morally blind, and to unshackle those held by chains of addiction and despair.” Black continued by saying, “Thank you for the force of his convictions that brought unity to division, light to darkness and hope to despair.”

As we celebrate the 243rd anniversary of the signing of the Declaration of Independence, may we remember in prayer the more than 225,000 military men and women and Department of Defense civilians who serve our nation in more than 150 countries around the globe. And may we especially remember the chaplains who, in Chaplain Ogilvie’s tradition, are there to help restore sight, unshackle chains, bring light to darkness and hope to despair. Our chaplains serve so that all may practice in peace.

Our chaplains serve in many branches of the federal government, countless health-care facilities and other community institutions ministering to women and men who often have no access to their own pastor. Chaplain Ogilvie beckoned others to start and maintain a relationship with the Lord. Our chaplains do the same.

Today, as you give thanks for your own freedom, please also pray for those who have voluntarily surrendered some of their own.

Lord God Almighty, in whose name the founders of this country won liberty for themselves and for us and lit the torch of freedom for nations then unborn: Grant that we and all the people of this land may have the grace to maintain our liberties in righteousness and peace; through Jesus Christ our Lord, who lives and reigns with you and the Holy Spirit, one God, forever and ever. Amen. (From the 1979 Book of Common Prayer)