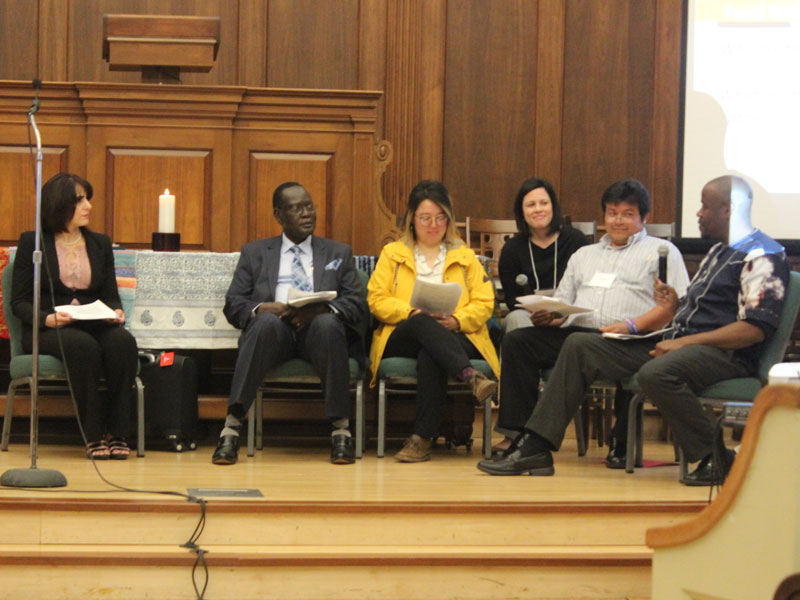 The Rev. Alonzo Johnson (far right), coordinator of the Presbyterian Committee on the Self-Development of People, leads a panel discussion on immigration and issues facing four regions of the world. (Photo by Rick Jones)

More than 220 Presbyterians gathered this spring at New York Avenue Presbyterian Church in Washington, D.C., for Compassion, Peace & Justice Training Day, which kicked off Ecumenical Advocacy Days. The annual gathering brings Presbyterians together to engage in issues of national and international interest. The theme for this year’s event was “A World Uprooted: Responding to Migrants, Refugees and Displaced People.”

Zavala, who was educated and ordained by the Evangelical Methodist Church of Nicaragua, described the mindset of people who are crossing the borders into the U.S., saying they face life-threatening issues every day because of poverty, government control and environmental racism.

“The South is suffering because of extractive industries. The rivers are polluted and species are becoming extinct. We don’t fight to protect the environment,” he said. “We talk about our situation in countries like South Sudan and when we do that, we are talking about ourselves.”

Kolko left Syria in 2014 and is working with churches and other groups to resettle families coming to the U.S.

“I’m happy to help every refugee family coming to this country to find a sponsor and give them everything that I didn’t have. In fact, I connected with three single mothers before I came here for CPJ Day,” she said. “I wanted to make sure they will have someone to meet them and transport them to homes that we have already found. I didn’t have anyone at the airport to welcome me when I came here four years ago, but I want that to be different for those that come here now.”

Choul described the struggles facing those who live in South Sudan. 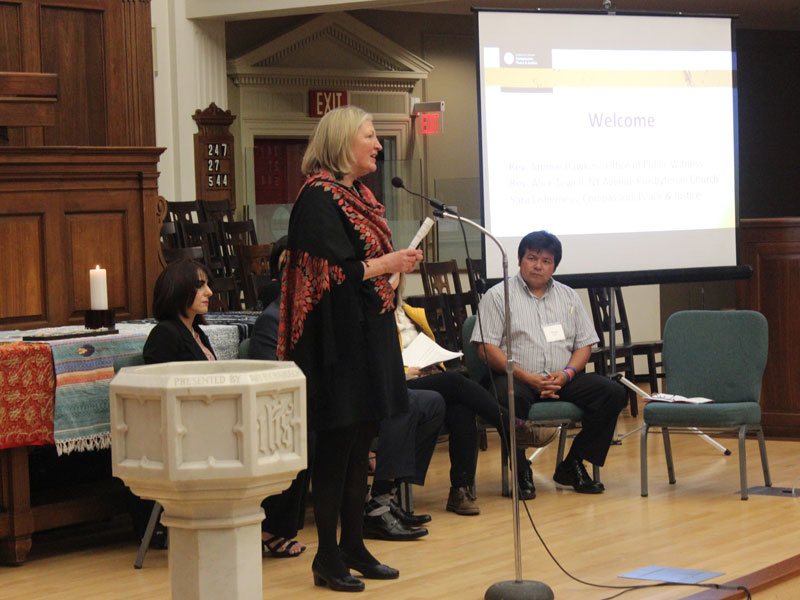 “There continues to be a power struggle between leaders in South Sudan, and people are suffering and dying,” he said. “It is our hope that a government will be established that cares for people. We hope we will achieve this through your prayers and support.” Kim told the crowd that the immigration issues became more prominent after 9/11 and says the result is a systemic failure.

“We’ve seen a huge influx of people coming through a system that is not sustainable and is outdated,” she said. “U.S. policies cannot accommodate the flow of immigrants coming through the country.”

The keynote speaker for the morning session was Dr. Matilde Moros, assistant professor with the Department of Gender Sexuality and Women’s Studies at Virginia Commonwealth University.

Quoting Dr. Martin Luther King Jr., Moros told the group that a civilization can flounder in moral bankruptcy as well as it can financially.

“A nation that spends more money on military defense than programs of social uplift are approaching spiritual death,” she said. “We must all see that these are revolutionary times. All over the globe, people are speaking out against old systems of exploitation, and a frail world with new systems of justice and equality are being born.”

Moros described a recent raid on a meat-packing plant in New Jersey, where immigrants seeking permanent residence in the U.S. were picked up by federal agents. She said the raid resulted in approximately 500 children not showing up for school the next day, and she added that children are the ones paying the ultimate price.

“We are talking about children whose parents’ livelihood is being stolen. These are people who simply want better lives,” she said. “We have a history of empire that has multiplied from generation to generation. How do we in our church understand this?”

More than 1,000 advocates from several Christian denominations spent the weekend attending lectures and workshops before heading to Capitol Hill to meet with lawmakers.

Gracious God, where there are countless reasons to be hopeless, overcome them all, so that the world may see communities of people come alive, reborn and renewed in Christ’s name. Amen.