Lord, prepare me to be a sanctuary

Tucson’s Southside Presbyterian Church is still at the sanctuary vanguard 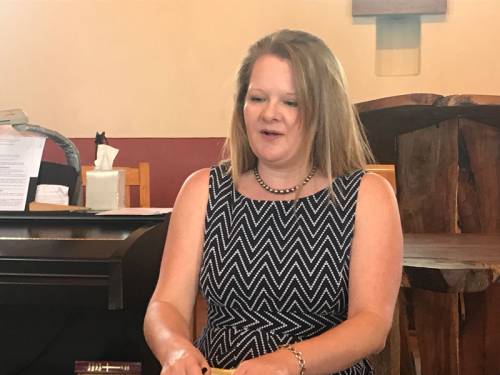 Tucson’s Southside Presbyterian Church is known for being a sanctuary church and for its joyous Sunday worship.

But its pastor, Alison Harrington, recently told a Presbyterian Mission Agency delegation that the other six days of the week are important for members and friends, too — as well as their pastor.

“To fail to see how people are navigating life during the week is pastoral malpractice,” she said.

Harrington spent more than an hour seated in the church’s Hopi-inspired sanctuary talking about the church’s past and present.

During the 1980s, the internal armed conflicts in El Salvador and Guatemala brought 14,000 refugees through Southside’s doors. “It was a formative time in the life of the church” that former General Assembly Moderator the Rev. John Fife once served. “People gave everything for the work of sanctuary,” taking refugees into their home for up to a year. “People still know us as the sanctuary church.”

While Fife framed the work in terms of civil disobedience, a church member disagreed, said Harrington, who’s in her 10th year at the church. Call it “civil initiative” instead, the member suggested. Since it was the faith community stepping up to fill the gap, it’s not breaking the law, the parishioner reasoned.

The church has taken on a $2.2 million construction project. The downside of the work is that with U.S. Immigration and Customs Enforcement “dumping hundreds of people into the community,” Harrington said the church can’t realistically house anyone until construction is completed. Other Tucson churches are opening their doors — some of them quietly, she said.

“There is a lot that is not possible, but that won’t always be true,” she said of the current political climate. “What we need to do is prepare the ground for our children so their work will be fruitful.”

Over the lunch hour Tuesday, the delegation heard about the work of Keep Tucson Together (KTT), a group with a small paid staff that works with a volunteer attorney and trained volunteers without law degrees to try to resolve deportation cases.

It’s a daunting task, said the organization’s Phil Stump-Kennedy: over the past two years, KTT has won only a dozen or so cases out of about 300.

On the plus side, KTT has helped about 1,500 “Dreamers” — Deferred Action for Childhood Arrivals — with about 95 percent of them securing a work permit, which must be renewed ever two years. 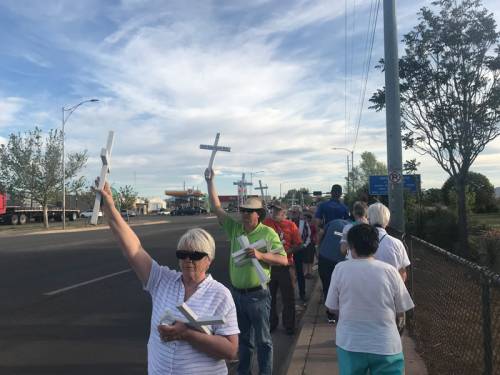 The Healing our Borders vigil prayer works its way down Pan American Highway in Douglas, Ariz., on Tuesday. (Photo by Mike Ferguson)

Once peace accords put a formal end to the fighting in El Salvador and Guatemala, “Southside had to figure out what to do next,” Harrington said. In 2010, Arizona legislators passed a law to criminalize giving aid to people who may be undocumented. The Southside session decided it had no choice but to file suit. “The choice was made at the baptismal font,” she said. “Everything flows from following Christ and renouncing evil in the world. It was a matter of absolute fidelity to the gospel. To me, that’s a beautiful place to be.”

Later Tuesday afternoon, the delegation joined the Healing our Borders prayer vigil in Douglas, Arizona, which, every Tuesday, remembers the 313 people who have died in Cochise County crossing at the most popular entry point for undocumented migrants along the 2,000 miles of the U.S.-Mexico border. The vigil began in December 2000 and runs along the Pan American Highway, ending near the border.

White crosses bear the names of those whose names are known as well as a few scant details, such as the dates of the person’s birth and death. As each name was read, the cross was propped against the curb, stretching into a long line. A few passersby waved or nodded as the hourlong vigil played out.

Loving God, thank you for continuing to move in our lives: for sending us and for sending others to us. Bless all whom you call to serve, whether down the street or across the world. In Jesus’ name. Amen.