Share God’s love with our neighbors-in-need around the world through One Great Hour of Sharing.
Make A Donation Click Here >

A view of the Holy City few get to see 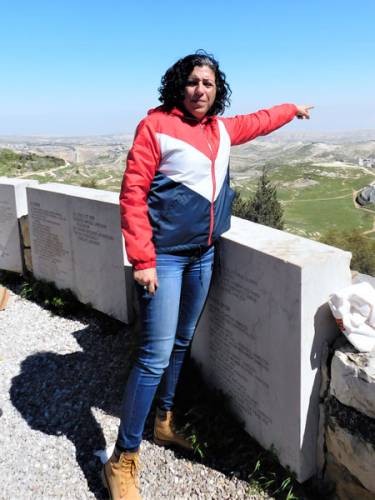 The Presbyterian delegation visiting Israel-Palestine this past spring took a unique tour of Jerusalem — one that most who visit one of the most holy cities in the world seldom see.

Fayrouz Sharqawi, the global mobilization coordinator at Grassroots Jerusalem, spent three hours with the delegation explaining the realities that she, as a Palestinian woman, lives daily.

She said that in 1948, the western side of Jerusalem was emptied of Palestinian residents and declared part of the newly created State of Israel. Immediately, Israel declared Jerusalem as its capital, a status that the international community has never accepted legally.

Palestinians refer to the events of 1948 as “Al Nakba,” which literally translates to “the catastrophe.” As a result of Al Nakba, there was documented destruction of over 500 Palestinian villages, 30,000 Palestinian deaths and the creation of 750,000 Palestinian refugees. To escape the fighting in Jerusalem, many Palestinian residents in the city packed a few essentials, locked their homes and left, hoping to return a short time later.

In the 1950s, Israel enacted the Absentee Property Law that has allowed for the takeover of Palestinian property deemed vacant.

In 1967, Israel won the Six-Day War and occupied the rest of Palestine, including the West Bank and the eastern part of Jerusalem from Jordan, which had been part of Jordan.

After the Six-Day War, Israel took legal steps to expand the city’s municipal boundaries to include most of the eastern side of Jerusalem but to exclude many of the villages and some of the suburbs that had been considered historic parts of the city for hundreds of years. Israel also initiated a census that counted only the Palestinian residents who were living within the new municipal boundaries. Today, about 90,000 Palestinians hold Jerusalem IDs, granting them the right to residency in Jerusalem, though many live on the other side of the annexation wall. Those who do must cross through Israeli checkpoints to reach Jerusalem for education, medical treatment, work and access to other needed services. 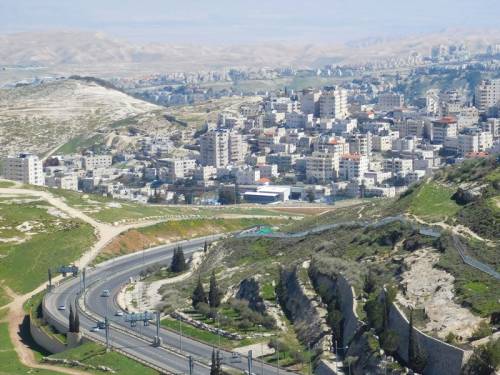 The buildings in the foreground are in the Palestinian village of Al Zaim, which event though geographically is closer to Jerusalem lies outside the Holy City’s municipal boundary. In the distance is the Israeli settlement of Ma’ale Adummim (Hebrew for “The Red Heights”), which is inside Jerusalem’s boundary. (Photo by Kathy Melvin)

Sharqawi said land has been systematically confiscated from Palestinians since 1967 for the construction of Israeli-only settlements. She quoted statistics that Palestinians make up 40% of the population in Jerusalem but own only 11% of the land that they need for homes, schools and medical centers. “The suffocation of Palestinian communities is also a very effective tool of displacement,” she said.

Grassroots Jerusalem takes tour participants on the road that connects Jerusalem to Jericho. In modern times, it was an important economic vein for Palestinians to move goods and services in and out of Jerusalem. That road is now entirely blocked by Israel’s wall/separation barrier, which was completed in this area in 2003. Palestinians are forced to go long distances around the wall and the flow of goods and services has effectively been cut off, she said, making the unemployment rate for Palestinians in Jerusalem about 80%. “Impoverishment is another tool of displacement for any occupying authority,” she said.

Grassroots Jerusalem estimates that more than 5,000 homes, commercial structures and agricultural sites have been demolished in Jerusalem since 1967, plus a total of about 30,000 in the West Bank. The Israeli government says the structures are illegal, which is true. It takes thousands of dollars to apply for a building permit and most are denied.

Today, estimates are that there are almost 7 million Palestinian refugees worldwide.

GA 223 Co-Moderator and Ruling Elder Vilmarie Cintrón-Olivieri was with the delegation in the spring. “It is my hope that sharing our stories will inspire the church at large to be informed of the realities of the region, listening to different voices, asking questions, researching international, credible sources, such as the reports of the U.N. Office for the Coordination of Humanitarian Affairs, and paying close attention to the accounts of our own mission co-workers on the ground. As stated in the Brief Statement of Faith, may the Spirit give us all courage ‘to unmask idolatries in Church and culture, to hear the voices of peoples long silenced, and to work with others for justice, freedom and peace.’”

Gracious and loving God, at times we forget what is really important: We neglect those in need, destroy our surroundings and turn away from your call to “tend and keep” your garden. Open our hearts, so that we remember that everyone and everything is a gift from you. May spread your loving care to every part of creation. Amen.