Methodists call on Presbyterian, Episcopal communicators for their expertise

Seated before more than 100 United Methodist Church communicators in St. Louis, the Rev. Sharon Youngs heard the voice of the Rev. Gradye Parsons, former Stated Clerk of the Presbyterian Church (U.S.A.), reverberating in her head.

“Get in the boat and go across the lake. There will be a storm. You will not die,” is the message that Parsons often preached, citing Jesus’ words of calm to his disciples when Presbyterians, like the United Methodist Church is now, were debating nearly nine years ago whether to change ordination standards to allow LGBTQ clergy, elders and deacons to serve. 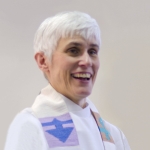 Youngs, who worked 10 years as communications coordinator for the PC(USA)’s Office of the General Assembly, is now pastor at First Presbyterian Church in Oak Ridge, Tennessee. She flew to St. Louis to address the United Methodist Association of Communicators, joining three Episcopalians who shared their experience with that church’s change in ordination standards in 2009.

“The most important thing we could say is that Presbyterians and Episcopalians had made it through and the bottom had not dropped out,” Youngs told the Presbyterian News Service. “There will be lots of angst and it is painful, but we trusted we were discerning the mind of Christ.”

She well remembers the day when the 87th and deciding presbytery ratified the General Assembly action on ordination standards. “I was sitting on a spot in Oak Island, North Carolina, where I found I could get a signal,” she told communicators. “When I got the text that the 87th presbytery had said yes, I then sent word to put our communications plan into action. Right then, a churchwide letter went out in three languages. Frequently asked questions were posted online, and more. And I let the reporters of major news outlets, like The New York Times, know the decision. I had cultivated those relationships before that evening.”

“In other words, we got ahead of everyone else — which was different for us,” she said. “It felt like we were usually behind the 8-ball, appearing to be defending ourselves after other independent, church-related news sources with an agenda would put out an article that was skewed and incorrect. But this time, it worked like clockwork.”

Youngs said she felt “a lot of anxiety in the room” as Methodists began their special session of the General Conference.

“But I think there was hope as well, and excitement that whatever comes out of this, there’s movement,” she said.

The Episcopal officials present — a bishop, a priest and a rector — told Methodist communicators that decline in membership among mainline denominations is similar across the board and is not due exclusively to the question of ordination standards. “It was another way of saying the bottom didn’t fall out,” Youngs said.

Especially for Christians who are high school age and young adults, “this has become such a non-issue compared to poverty and climate change,” she said.

Youngs shared a portion of what the PC(USA) communicated to churches on that day in 2015:

“Reactions to this change will span a wide spectrum. Some will rejoice, while others will weep.

“Those who rejoice will see the change as an action, long in coming, that makes the PC(USA) an inclusive church that recognizes and receives the gifts of ministry of all those who feel called to ordained office.

“Those who weep will consider this change one that compromises biblical authority and acquiesces to present culture. The feelings on both sides run deep.

“However, as Presbyterians, we believe that the only way we will find God’s will for the church is by seeking it together — worshiping, praying, thinking and serving alongside one another.

“We are neighbors and colleagues, friends and family. Most importantly, we are all children of God, saved and taught by Jesus Christ, and filled with the Holy Spirit.”

When their hour-long session concluded, Methodist communicators told Youngs they appreciated hearing that indeed, the bottom had not fallen out.

“They were such a gracious bunch of folks,” she said.

Gracious God, thank you for how you are using us to inspire your church. We pray that each of us would recognize how we are — and can be — part of a church participating with you in drawing others closer to Jesus. Amen.