The first to say yes 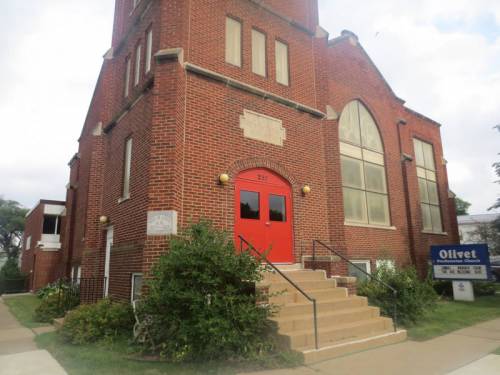 A small congregation has set its sights on making a big impact in its community.

“It’s so exciting,” said the church’s part-time pastor, the Rev. Michele Scott, who returned to the community where she grew up after serving churches around the country and working for a Cedar Rapids aerospace company. “Olivet has always been my idea of the church that is listening to the Spirit and is actively involved in ministry.”

In an online communication, members of the 115-year-old church said they’re working on two of the three Matthew 25 goals — eradicating systemic poverty and building congregational vitality. The third goal is dismantling structural racism.

The Olivet Neighborhood Mission, which the church established nearby during the early 1980s after running out of room to hold clothing and food donations, served more than 24,000 clients last year, according to Denise Helle, an Olivet Presbyterian Church ruling elder. The Mission distributed more than 8,200 food boxes and received more than 9,900 clothing donations.

The Olivet Neighborhood Mission also provides Head Start education as well as space and support for 70 youth enrolled in the Boys and Girls Club that meets at the Mission.

“Trends indicate that the number of clients and the severity of their needs will continue to increase,” Helle said. “There are plans to increase capacity for food storage and distribution.”

Helle said church members “listen closely to our neighbors who come to the Mission.” When pleas for weekly support groups were voiced, the church responded. Services provided during those support groups include Bible study and prayer as well as workshops on cooking on a shoestring, budgeting and mental health resilience.

“We may be comparatively small in membership,” Helle said, “but this is not a deterrent. We will be open-handed and freely give always.”

“We are discipling the community by reaching out,” Scott said.

She said she’s at the Mission for about two hours each Friday, when about 150 people show up for food, clothing or services.

“We are interested in greeting them cheerfully,” she said. “Some share the challenges that they have, and we ask if we can put them on the prayer list” — anonymously. Even with more than 131,000 people, “Cedar Rapids is still a small metro area,” Scott said. “We never share even first names.”

As to congregational vitality, Scott said there’s always the possibility that a church the size of Olivet Presbyterian Church will one day close.

“But it’s a vital part of this community, and it certainly would be missed,” she said. “The Lord is always preparing us to make something new to transform this world. We are already doing a lot of work, but there is still a lot more to do.”

Scott said church members are “still figuring out” how to provide a mental health support group, with the county’s mental health center just a short walk from the church.

“A member came to me and said, ‘You know, there will be folks in the neighborhood who say, ‘Not in my backyard,”’ Scott said. “We need to help people understand how they can be part of the solution.”

Many of the 70 children served by the Boys and Girls Club that’s housed at the Mission will attend this summer’s Vacation Bible School, which meets for three hours every Wednesday evening in July. This year’s theme is mission, Scott noted.

In previous work, Scott said, she sometimes had to cajole church members to get involved in their neighborhood. That’s not the case at her current church.

“It’s a strange experience,” she said, laughing. “I’ve had to rein people back.”

Gracious God, we thank you for adopting us into the family of faith. Challenge us to find ways to join hands with others, that we might together glorify your name. Amen.