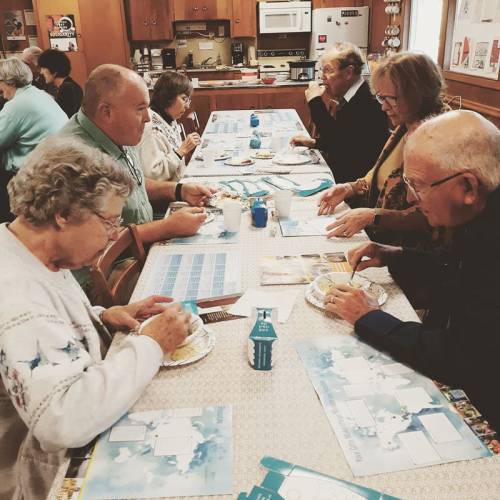 Three small Presbyterian congregations have combined the spirited competition of a fishing derby and the iconic One Great Hour of Sharing (OGHS) fish banks to promote giving to the churchwide offering.

In this Fishing Derby, OGHS fish banks are used rather than traditional tackle, and instead of angling for fish, these congregations are filling the fish banks with coins that will benefit ministries supported by OGHS.

The Fishing Derby tradition began two years ago, after St. James member Cathy Thompson read an article about a Presbyterian congregation that was sponsoring an actual fishing derby. Thompson’s creative juices started churning, and she came up with the idea of connecting the OGHS fish banks with a fishing derby.

The first derby was an intra-congregational contest at St. James. The competition pitted the congregation against the choir with three categories for participation: Heaviest Fish (weighs the most), Biggest Fish (contains the most money), and Grand Total Catch.

The following year, Thompson reached out to other small Presbyterian churches, and Marshall Presbyterian Church accepted the challenge. The two congregations exchanged emails and phone calls after the counting was done, and then had a Skype session to celebrate the success of the derby.

Marshall won the Heaviest Fish category at 5 pounds, 13 ounces (the bulging fish bank had to be held together with duct tape) and the Biggest Fish category, but St. James won the Total in the Net competition.

Both congregations saw their Offering participation increase and had fun making new friends while engaging in some friendly competition. Because of last year’s success, both St. James and Marshall agreed to participate again this year. St. John’s Chapel by the Sea joined the competition this year for the first time.

Each family unit in the three congregations have one fish bank in which to collect their coins. They are encouraged to use two resources produced by the Presbyterian Church (U.S.A.)’s Special Offerings staff, the engagement map and Lenten giving calendar placemats, as guides for giving. The congregations continue to make Offering envelopes available for their members who want to participate in that way. The congregations inform each other of their result.

Thompson is grateful for the enthusiasm the Fishing Derby has stirred for OGHS in her congregation, and she is glad the excitement is spreading. “We see what our little but mighty congregation can achieve,” she said. “We are overjoyed to help other congregations achieve.”

Bryce Wiebe, the PC(USA)’s director of Special Offerings, said he is amazed at the ideas that congregations develop to promote giving to OGHS and other offerings.

“For 70 years, Presbyterians have joined together in the One Great Hour of Sharing Offering, and for just as many years, they have had creative ways of engaging with the Offering,” Wiebe said. “From fun displays to playful skits, congregations across the denomination have put their own spin on things to promote the Offering.”

God, help us to discern your presence in all creation, from the smallest creatures to the great inhabitants of the seas and the birds that fill the skies. Inspire us once again to be caretakers of your holy garden. Amen.