In late January, Daniel Pappas was riding in a van with his video equipment, traveling toward the border of Burma (Myanmar). Most people don’t get that kind of opportunity, but to him it’s just another happy step on a path he didn’t know he was taking. 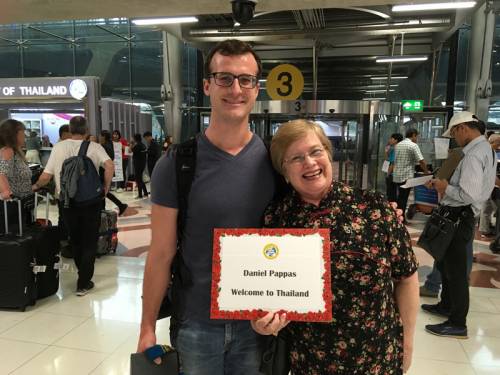 A native of Dallas, Pappas was born into Eastminster Presbyterian Church. Some 25 years later, he is making videos for mission co-worker the Rev. Sharon Bryant to recruit English teachers for the program she supervises, Christian Volunteers in Thailand (CVT). Both Bryant and Pappas are connected with Grace Presbytery in Texas, and when a delegation from Grace visited Thailand, Bryant was so impressed with the video work Pappas did, she invited him back to create recruitment videos.

The video project is being funded by The Presbyterian Church of Red Bluff in California, from a bequest made by Gordon Todd, who died at 99 and wanted Red Bluff’s special funds committee to use the money to support mission projects. Todd’s sister was a missionary in China and he was so enthralled with her stories, he wanted to honor her work. Three brief videos are available for congregations and presbyteries who want to learn more about teaching English to children in Thailand.

Pappas spent a month in Thailand with Bryant and talked to volunteers, alumni and school administrators. The goal, according to Bryant, is to look for people who “have a desire to share the love of God with the Thai people.” The program is under the direction of the Church of Christ in Thailand, a longtime PC(USA) global partner.

By expanding English offerings, the CCT hopes to strengthen the church’s witness and give Thai students an important tool for success in academia and international commerce.

Thailand has been an active member of the Association of Southeast Asian Nations (ASEAN) for almost 50 years. The country has been moving toward integrating itself more closely with its Asian neighbors to form a community of nations similar to the European Union. Opening national borders and reducing trade restrictions is creating an increasing demand for the use of the English language — the only language the ASEAN nations have in common.

CCT was founded 1934 as the Church in Siam with the intent of forming a single ecumenical denomination to include all Protestant churches in Thailand. Other than a small number of American Baptist and British Churches of Christ congregations, most of the original member churches were Presbyterian congregations, many of which were started by missionaries from the American Presbyterian Mission Board. 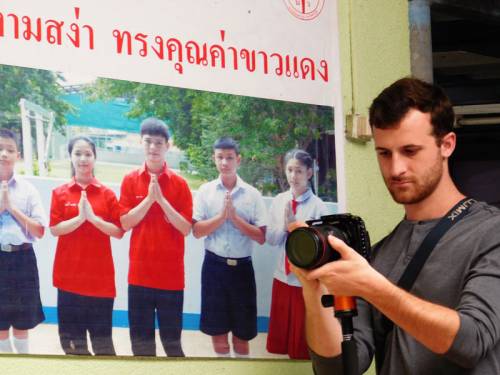 Daniel Pappas shoots video at a Church of Christ in Thailand school. (Photo by Kathy Melvin)

Pappas said there were common themes in the interviews he conducted. Almost everyone said the children captured their hearts and they would stay in Thailand as long as they could. “Everyone I talked with said they would recommend the program to anyone who felt called by God to serve,” he said. “If you have a heart to serve, the CVT program is the place for you.”

After completing high school in Dallas, Pappas attended Southern Methodist University to study film. Both of his parents did their undergraduate degrees there and his father graduated from SMU’s law school. Pappas said he applied to SMU to appease his parents. Nine colleges accepted him, but he felt SMU offered the best opportunities.

Pappas spent a year in the Young Adult Volunteer Program (YAV) in Peru shooting and editing video interviews with native tribes, documenting their stories of forceful land evictions, unlawful water pollution and their collective resistance. He also recorded teen-led workshops about human trafficking prevention and learned, and then taught, Spanish sign language at a clinic for deaf children in the area.

After completing his YAV year in 2016, Pappas returned to Dallas and began working in communications for Grace Presbytery, which had initiated the contact with Bryant. He is currently forming his own freelance video company and hopes to specialize in generating content for nonprofits. He said that working for his church is truly an honor.

Anyone interested in sharing the videos about Christian Volunteers in Thailand should contact mission co-worker Sharon Bryant at sharon.bryant@pcusa.org.

Lord, thank you for making us participants in your work. Please allow us to come together to share in your plans for creation and to place your plans above our own. Keep us in your love and grace. Amen.