Alton B. Pollard III is installed in ceremony marked by drumming, music and joy 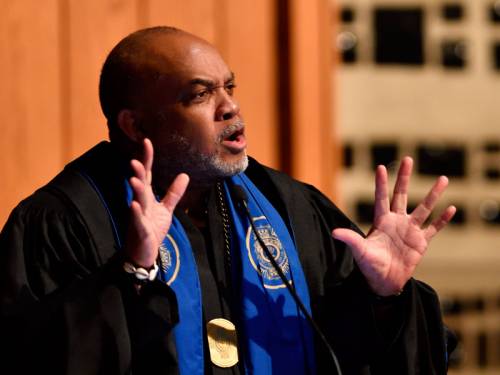 The Rev. Dr. Alton B. Pollard III delivers his inaugural address Friday in Caldwell Chapel at Louisville Presbyterian Theological Seminary. He was installed as the seminary 10th president. (Photo by Jonathan Roberts)

“Buckle your seat belts, Louisville Seminary,” the Rev. Dr. J. Herbert Nelson, II, Stated Clerk of the General Assembly of the Presbyterian Church (U.S.A.), told the crowd in a packed Caldwell Chapel during the inauguration of the seminary’s 10th  president, the Rev. Dr. Alton B. Pollard III. “A new day is coming to this institution, a new day that has been ordained by God. Praise be to God for what God has in store for this work of ministry and faith.”

Pollard, the former professor and dean of the School of Divinity at Howard University in Washington, D.C., began his work heading Louisville Presbyterian Theological Seminary on Sept. 3, 2018, succeeding the Rev. Dr. Michael Jinkins, who retired. Pollard was installed this past spring by the chair of the seminary’s Board of Trustees, the Rev. Lant B. Davis, as the seminary’s president and professor of religion and culture.

At the inauguration, Pollard told a story he called “formative,” when as a fifth-grader a group of white boys “descended on me with a torrent of fists and racial epithets. To this day I don’t know how I got the best of that fight — I only know that I did.”

School suspensions followed — “theirs, not mine,” Pollard said. His mother, who “always told me I would have to answer to her if I did not vigorously defend myself when confronted,” was pleased with the outcome, “but my father, not so much.”

Each succeeding year in high school, “my anger as a young black man grew,” Pollard said. People asked him why he didn’t smile for any of his high school yearbook photos. “I didn’t have nothing to smile about,” he would tell them. 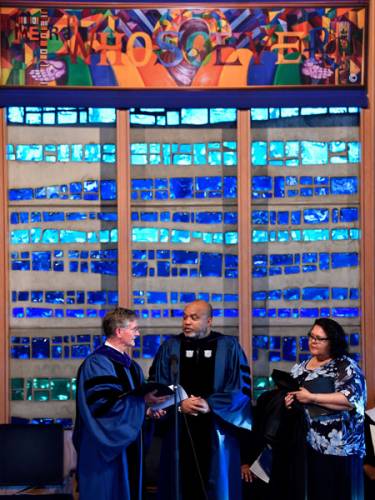 The Rev. Dr. Alton B. Pollard III answers installation questions posed by Lant B. Davis, chair of Louisville Seminary’s Board of Trustees. At Pollard’s left is his wife Jessica. (Photo by Jonathan Roberts)

But college, he said, was a time for “re-education, my metanoia experience as a person of African descent.” What emerged, he said, was “a recognition that atrocities and injustice notwithstanding, the divine invitation was to goodness and generosity, joy and justice. It became a sacred truth for me — whether you accept me or not, we are made for each other.”

He said he envisions a Louisville Seminary “where no pretense is required,” a “theological institution that wrestles with inconvenient truths,” a school of higher learning that “wages peace and practices antiracism with unprecedented courage.” He sees the seminary already as a place that “invites, advocates and includes” people of every age, class, sexuality, gender identification “and more, every religious tradition and none at all, a graduate theological school that extends belonging to the community and around it, spreading even into disregarded places.” He said he also sees a “learning network responsive to the sacred call to care for the Earth.”

The seminary’s motto, “many lamps, one light,” means Louisville Seminary is to be “a signpost on the way to the one who calls us beloved, who calls us into community,” he said.

The energy and hope that Pollard has already demonstrated are “fueled by the sense that there’s still a lot of important work to do,” Pauw said. “They are sustained by a debt of gratitude for generations past who kept on keeping on, who, as he has said, ‘held on when there was nothing to hold on to.’”

“His scholarship, energy and hope will help (faculty) to educate men and women to participate in the redemptive ministry of Jesus Christ in the world,” Williamson said.

Lord Jesus, we believe that your Spirit is still at work in the world. Free us from discouragement and give us eyes to catch glimpses of you and the courage to step beyond our walls to be the church in our communities. Amen.