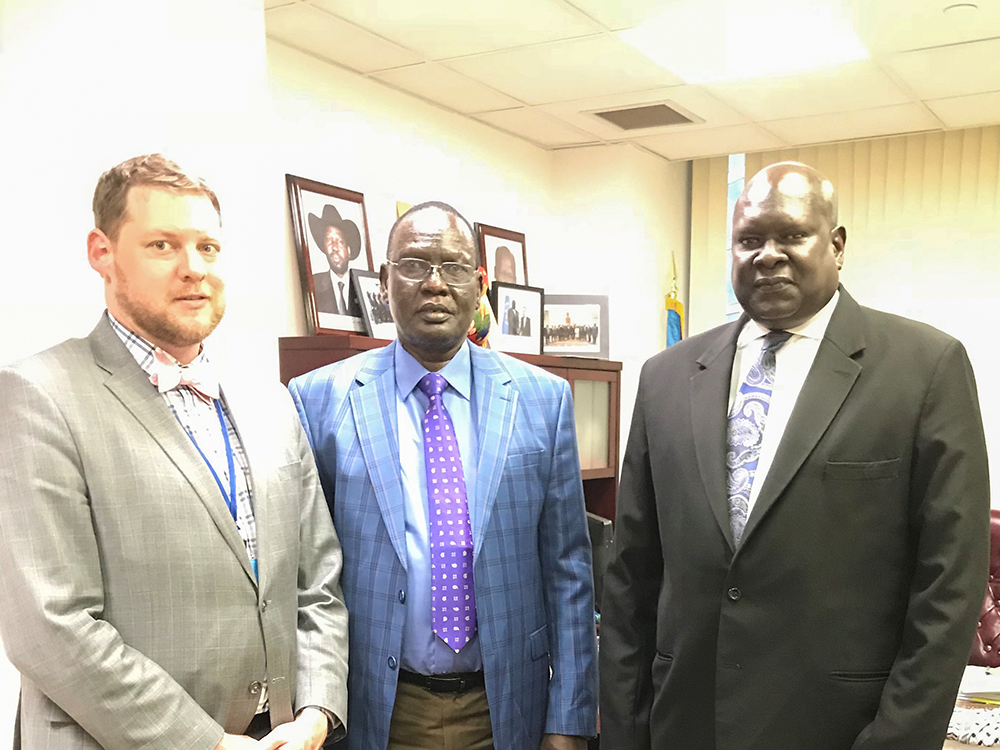 Ryan Smith, the Director of PMUN and Representative to the United Nations and James Makuei Choul met with Ambassador Akuei Bona Malwal, Ambassador Extraordinary and Permanent Representative Republic of South Sudan at the UN in New York. (Photo by PMUN)

Ten humanitarian workers, held by an armed opposition group in South Sudan, were freed after five days in captivity. The United Nations announced April 30 the release of the staff, all South Sudan nationals.

Alain Noudehou, humanitarian coordinator for South Sudan, confirmed that the workers were returned safely and in good health. In a news release, he commended the efforts to get the 10 released, especially the efforts of the International Committee of the Red Cross. Noudehou went on to criticize the deteriorating environment for humanitarian work in South Sudan.

“I am deeply concerned by the insecurity faced by aid workers who risk their lives to save others,” he said. “I strongly urge the parties to the conflict to abide by international humanitarian law and ensure that workers are safe while delivering assistance and services to people in need.”

“The meetings were fantastic. I met with Akuei Bona Malwal, Ambassador Extraordinary and Permanent Representative from the Republic of South Sudan and delivered a message for peace,” he said. “As we talked, I asked him if he was optimistic about the upcoming round of talks to end the conflict. It’s very hard to say, but we are all hoping for divine intervention.”

Choul is executive director of the Presbyterian Relief and Development Agency, the humanitarian arm of the Presbyterian Church of South Sudan. While in New York, he met with civil society, ecumenical partners and interested Presbyterians at the PMUN’s Open House, a monthly educational forum, to shed light on the current situation in South Sudan. He stressed the need to advocate for peace with the international community and support for Internal Displaced Persons (IDPs) and refugees in South Sudan.

“With militias coming, towns are being destroyed overnight,” he said. “There needs to be a humanitarian intervention. We need a political voice. Who is helping us? Who is talking about us? This is now a war in proxy.”

Despite moving to camps, Choul says the people are suffering.

“Refugees are scattered in other regions. IDPs are in U.N. camps, separated from family members or facing confinement. Life is not easy,” Choul said. “Our brethren come to our aid, supporting IDPs and refugees and propagating for peace.”

At the Mission, Ryan Smith, director of the U.N. ministry, also delivered Red Hands, the campaign to stop using child soldiers. He requested that the government of South Sudan ratify the international treaty, Optional Protocol to the Convention on the Rights of the Child on the Involvement of Children in Armed Conflict. Ambassador Malwal agreed to convey the message to his capital.

Smith says he was encouraged by the meetings.

“I’m optimistic that Rev. Choul’s visit has been able to amplify the voices of those hoping for peace in South Sudan,” he said. “The country has almost become the forgotten conflict, but the meetings this week have helped remind leaders at the U.N. that the conflict continues. Rev. Choul has been able to bring a message of hope for peace in the region.”

Smith says the meetings show the importance of the church’s ministry at the U.N.

“The Presbyterian Ministry at the United Nations continues to work on ongoing conflicts that aren’t on the front page of the New York Times and Washington Post. Our connection to church partners around the world, inspire and call us to continue that advocacy,” said Smith. “This visit for us is living out the ministry we are called to do, bringing voice of those most affected by conflict to leaders at the U.N. and addressing it head-on. Even if peace is not imminent, we know in God, peace is possible.”

O Lord, open our hearts to receive those who come into our midst in need of safety and protection. May all be treated as children of God who reveal the in-breaking of your kingdom on earth as it is in heaven. Amen.