When Americans say they believe in God, what do they mean?

Most Americans believe in a higher power, Pew survey finds 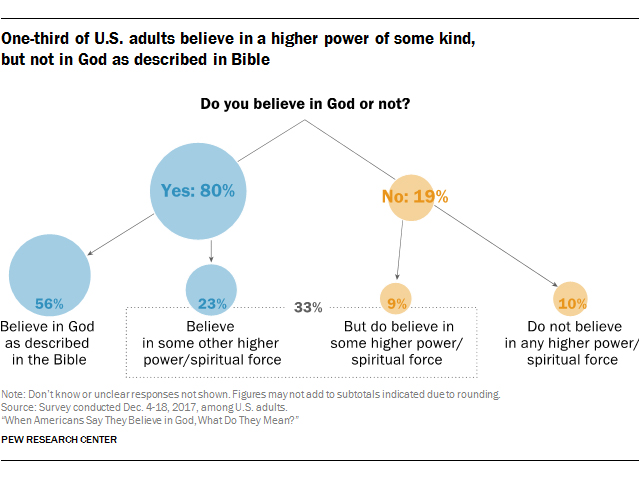 A Pew Research Center survey of more than 4,700 U.S. adults finds that most Americans — 80 percent — say they believe in God, but only about half of the respondents (56 percent) believe in God as described in the Bible.

One in 10 respondents do not believe in any higher power or spiritual force.

In the U.S., belief in a deity is common even among the religiously unaffiliated, a group sometimes referred to as religious “nones.” Indeed, nearly three-quarters of religious “nones” (72 percent) believe in a higher power of some kind, even if not in God as described in the Bible.

The survey questions that mentioned the Bible did not specify any particular verses or translations, leaving that up to each respondent’s understanding. But it is clear from questions elsewhere in the survey that Americans who say they believe in God “as described in the Bible” generally envision an all-powerful, all-knowing, loving deity who determines most or all of what happens in their lives. By contrast, people who say they believe in a “higher power or spiritual force” —but not in God as described in the Bible — are much less likely to believe in a deity who is omnipotent, omniscient, benevolent and active in human affairs.

In addition, the survey finds that three-quarters of American adults say they try to talk to God (or another higher power in the universe), and about 3 in 10 U.S. adults say God (or a higher power) talks back. The survey also asked, separately, about frequency of prayer. People who pray on a regular basis are especially likely to say that they speak to God and that God speaks to them.

These are among the key findings of the survey, conducted Dec. 4–18, 2017, among 4,729 participants in Pew Research Center’s nationally representative American Trends Panel, with an overall margin of sampling error for the full survey of plus or minus 2.3 percentage points.

The findings can be found at: pewforum.org/2018/04/25/when-americans-say-they-believe-in-god-what-do-they-mean.

God, help us to grow deeper in our faith and understanding as Jesus’ disciples. We pray in Jesus’ name. Amen.