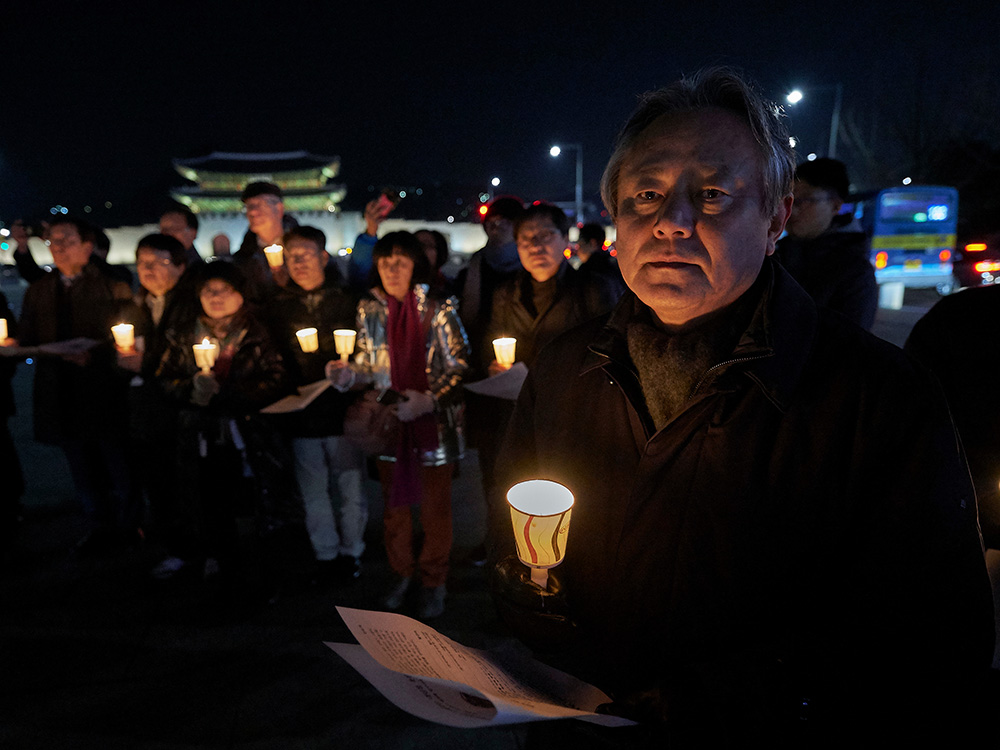 The Rev. Lee Hong-jung, general secretary of the National Council of Churches in Korea, participates in a candlelight vigil for peace in the Korean Peninsula on December 9, 2017, in Gwanghwamun Square in Seoul, South Korea. (Photo by Paul Jeffrey/WCC)

Tomorrow members of the Presbyterian Church (U.S.A.) will join in prayer to commemorate the beginning of the Season of Prayer and Reflection in the Korean Peninsula. The annual observance will conclude on Aug. 15.

The leaders of North and South Korea signed the agreement, which seeks a formal end to the Korean War and the complete denuclearization of the peninsula, at a summit in the demilitarized zone.

The NCCK expressed its strong support and respect for the declaration and the summit.

“Having recognized the absurdity and pain brought forth by separation, for more than 50 years the NCCK has worked for the reconciliation and peace of Korea while praying without ceasing,” the statement reads. “We strongly support the agreement to replace the armistice treaty with a peace treaty by the end of this year, and to build a long-lasting and stable peace in the peninsula through complete denuclearization.”

The NCCK also strongly supports the agreement to transform the demilitarization zone into a “peace zone” and to establish a peace zone in the West Sea.

“We also support the commitment to cease all hostile military acts,” the statement continues. “We strongly support the agreement to ensure the participation of civilians in the reunification process as seen in the decision to establish a joint liaison office and to resume the reunion events of the separated families.”

Today’s Focus: Season of Prayer and Reflection in the Korean Peninsula

Gracious God, lead us down a holy path of peace, so that we can be peacemakers wherever we are. In the name of the Prince of Peace, we pray. Amen.