The battle had begun just over a month before, on Feb. 19, 1945. In the intervening 29 days, combat had raged 24 hours a day, seven days a week. In one particularly bloody battle, the Meat Grinder, 850 Marines had lost their lives. On March 21, the time had come to commemorate the more than 6,800 who had given their lives on the American side. Nearly 20,000 Japanese draftees had defended the rough rock island of Iwo Jima. Most of them had perished. 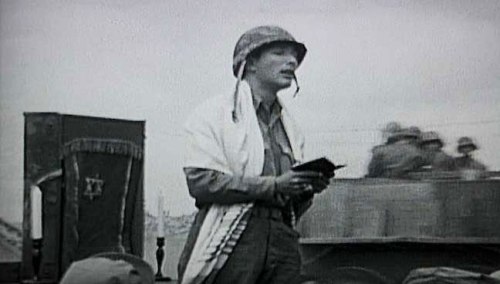 Chaplain (Rabbi) Roland Gittelsohn was selected to deliver the memorial sermon at a combined religious service dedicating the cemetery in which the Marine dead were buried. Racial and religious prejudice intruded as many of the Christian chaplains objected. Gittelsohn voluntarily withdrew from the assignment and instead presided over his own service for fallen Jewish service members. To their credit, several Christian chaplains chose to attend Gittelsohn’s service in support of their colleague. He had ministered to all during the battle and was respected for his love and compassion.

Gittelsohn delivered a sermon called The Purest Democracy. A borrowed manuscript was reprinted and distributed. Marines sent copies home, permitting its wide circulation, even to the point of its being read in to the Congressional Record. The Purest Democracy is considered by many as one of the most significant spoken memorials to war dead in our nation’s history.

In the sermon, Gittelsohn states: “We dedicate ourselves, first, to live together in peace the way they fought and are buried in war. Here lie men who loved America because their ancestors, generations ago, helped in her founding, and other men who loved her with equal passion because they themselves or their own fathers escaped from oppression to her blessed shores. Here lie officers and [privates], [blacks] and whites, rich and poor — together. Here are Protestants, Catholics and Jews — together. Here no man prefers another because of his faith or despises him because of his color. Here there are no quotas of how many from each group are admitted or allowed. Among these men there is no discrimination. No prejudice. No hatred. Theirs is the highest and purest democracy.”

As our nation observes this Memorial Day 2018, may we remember the over 1.2 million citizens who have given their lives in service to this nation.

Our church today has nearly 100 military chaplains scattered to the far ends of the globe. Many of them will lead their troops in observance of this day of memory — leading in many situations as they remember friends and colleagues who now lie silent in the grave.

As we pause to remember those who paid the ultimate sacrifice, may we also remember the rabbi’s encouragement so many years ago. We are to “dedicate ourselves, first, to live together in peace.”

Psalm 34:18: “The Lord is near to the brokenhearted, and saves the crushed in spirit.”

Eternal and living God, surely your goodness and your mercies have followed us all the days of our lives. On this Memorial Day we pause to remember that our blessings, liberties and rights have been secured at great sacrifice to others. Loving Lord, we ask you to console and strengthen those who mourn the loss of their loved ones. May this day be a time to remember the grief of our loss and turn our eyes forward, seeking the fruit of your peace ahead. Amen.