For more than 200 Presbyterians, Ecumenical Advocacy Days began with Compassion, Peace & Justice Training Day at New York Avenue Presbyterian Church and ended with a visit to Capitol Hill to lobby Congress for changes in the approach to immigration and refugees. 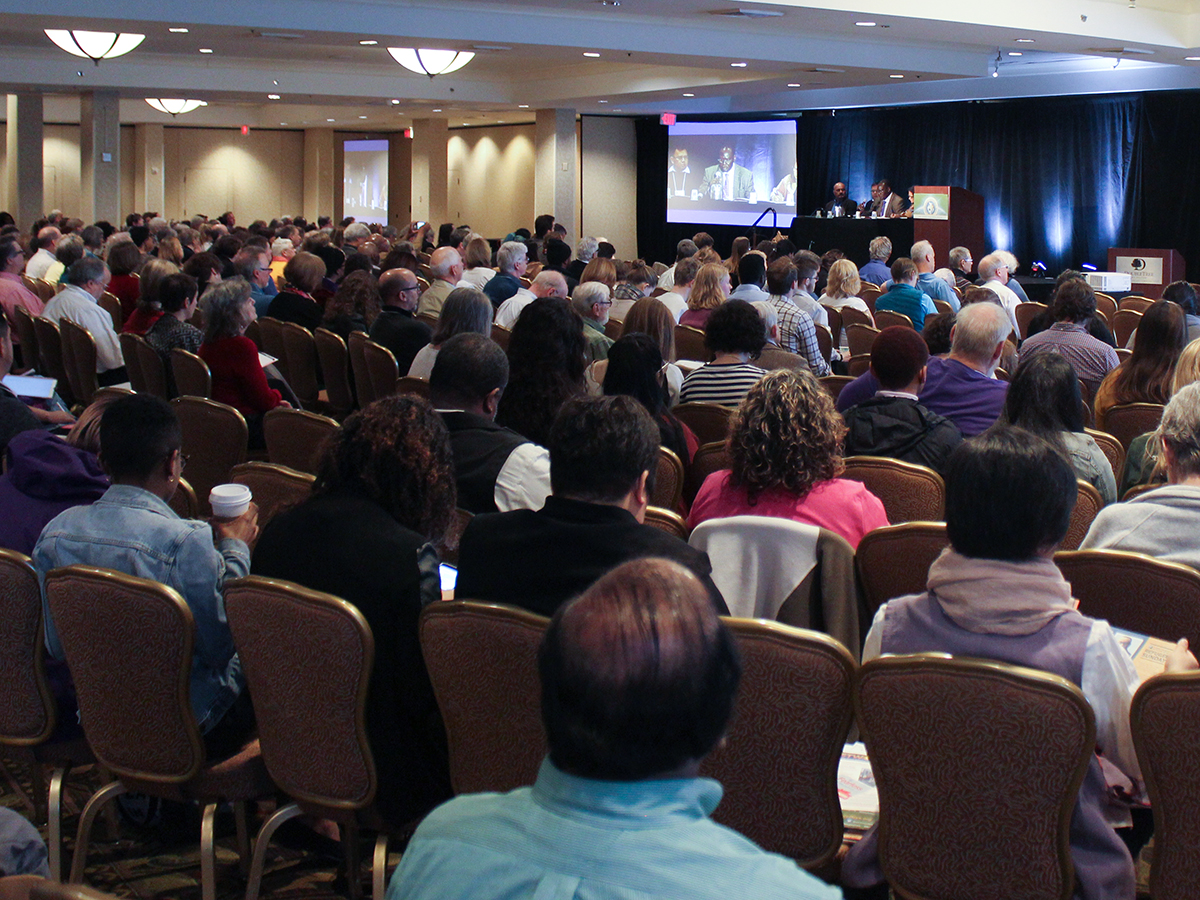 Presbyterians and members of other Christian denominations gathered in Washington, D.C., to discuss immigration, refugees and the displacement of people. (Photo by Rick Jones)

The 16th annual Ecumenical Advocacy Days for Global Peace with Justice was held in Washington, D.C., focusing on the theme “A World Uprooted: Responding to Migrants, Refugees & Displaced Persons.” Clergy and members of the Presbyterian Church (U.S.A.) joined their counterparts in other denominations to worship, debate and hear from those who are facing displacement because of conflict, climate change and poverty.

“There are more than 65 million displaced people in the world, and at least 20 to 30 million are refugees,” said the Rev. John L. McCullough, president/CEO of Church World Service, in his opening remarks. “All kinds of people are seeking a sense of peace, justice and fairness. They all want to have a safe place to call home. Never have we faced a time like this.”

“Millions have been uprooted by violent conflict, corruption and the environment,” she said. “We cannot stand on the sidelines and be silent. We cannot shrug our shoulders and only send thoughts and prayers.”

The weekend activities consisted of numerous workshops focusing on immigration, environmental racism and the impact of disasters on displaced people.

The Rev. Dr. Elizabeth Conde-Frazier, vice president and dean of Esperanza College at Eastern University in Pennsylvania, told the group that Christians need to respond with solidarity.

“Imagine you don’t have your identity, roots, language, home and property. Imagine having to let go of vital connections and life lines, move away from everything that gives you your identity,” she said. “If we want to see life restored, it’s not by cutting budgets, but by embracing the stranger. We are here as a united group, not representing a particular party, but the heart of Jesus.”

Conde-Frazier says the “knowledge of compassion” is needed on Capitol Hill. 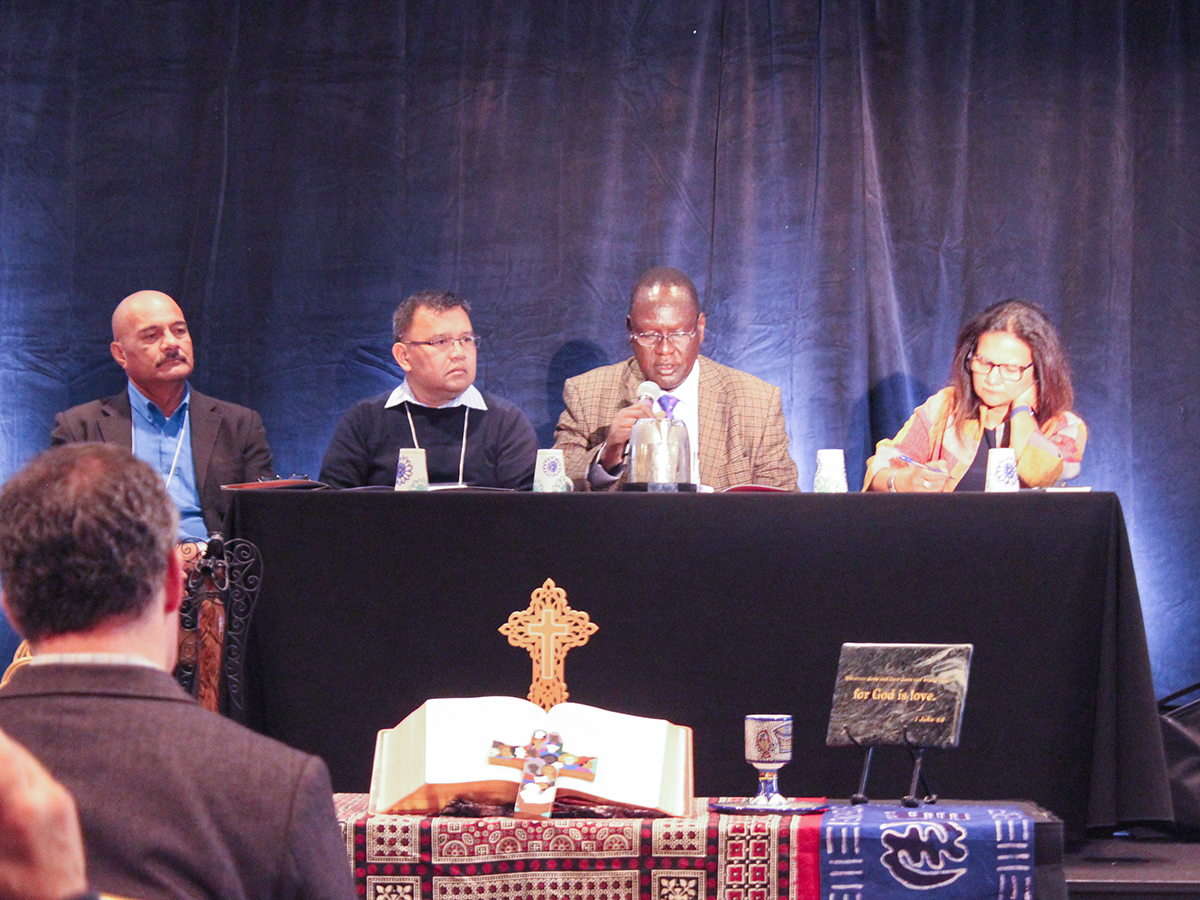 “Those opposed to us have tried to bury us, but they don’t know that we are seeds. They don’t realize that we can give them so much more,” she said. “However, I have never seen this many people come out in support of undocumented youth, so much of the American public on our side. You couldn’t get that many Americans to agree on a pizza topping.”

Panelist Jonathan Jayes-Green encouraged attendees to return to their communities and build relationships with Dreamers.

“Utilize whatever privileges and resources you have to help those people who need it,” he said. “Faith without deeds is dead.”

“We appeal to the U.S. government to put pressure on South Sudan’s leaders so that this conflict is resolved peacefully. The suffering of people should be brought to an end,” he said. “People are being removed from the comfort of their homes, and their livelihoods are in jeopardy. They are suffering a lack of medical services and food. Whatever they receive from the United Nations is not sustaining their lives.”

Another panelist, the Rev. Tafue Lusama, is the secretary-general of the Christian Church of Tuvalu, an island nation in the south Pacific, which has been battered by rising tides due to climate change. He says the land is not fertile for crops and the fishing is scarce, prompting many to leave the island.

“It is not easy for our people to get jobs,” he said. “Even professionals are struggling. But we are concerned about losing the land we have, and if we totally we give up now, we will be roaming this planet as a homeless people.”

Dear God, help us respond to your call to help those who are suffering. In Jesus’ name we pray. Amen.