Three congregations from two states, presbyteries and synods merge to become one

If you overlook the name of a church, sometimes you miss a vital story in the life of their congregation. Such is the case for Valley United Presbyterian Church.

The church is in the Penn-York Valley, which is 4 miles in length, sandwiched between the Susquehanna and Chemung rivers. In 2014, after going through New Beginnings, three Presbyterian Church (U.S.A.) congregations in three towns — Sayre, Athens and Waverly — decided to merge.

As part of the merger agreement, Valley United was given time to decide which church they were going to worship in and which presbytery they wanted to belong to. They sold the smallest church building in Sayre and began worshiping every other month at the remaining buildings.

In 2016 they voted to accept an architect’s recommendation to renovate the Waverly church building and make it their permanent church home. They moved into the building in fall 2017, even though the Waverly building is still under construction.

Although the congregation is physically located in New York, members chose to be a part of Lackawanna Presbytery in Pennsylvania because it has a camp that church members’ kids and now grandkids have gone to over the years. 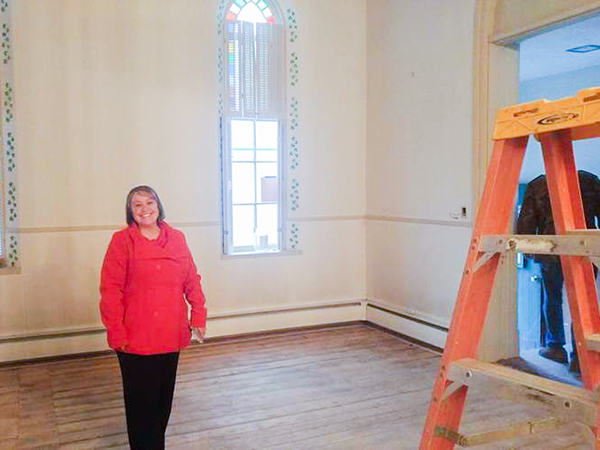 Sharan Knoell Rosso standing in what will be her new office space at Valley United Presbyterian Church. (Photo provided)

“It was one of the least stressful decisions of the merger,” said the Rev. Sharan Knoell Rosso. “Camp Lackawanna is part of our spiritual heritage.”

Knoell Rosso took the call to lead Valley United through its merger in 2014 because she believes it is the future of small-town ministry for Protestant congregations in the U.S.

“The church of the 1950s and ’60s is over,” she said. “I’d rather go through the pain of congregations selling their assets than seeing them die.”

Valley United will host a joint presbytery meeting to follow up on an idea that has come out of the work of three congregations merging into one.

“You know, we all think we should be working together more,” Knoell Rosso said. “We’re all ministering to the same demographic. Aging people born in small towns, on both sides of the border.”

An overture (OVT-024) from Susquehanna Valley Presbytery to the 223rd General Assembly (2018) recommends that the border between Synod of the Northeast and Synod of the Trinity be realigned so that First Presbyterian Church of Waverly, New York, can be transferred to the Presbytery of Lackawanna.

Loving God, for the grace that surrounds us and the gospel that claims and sends us, we give you thanks. Amen.