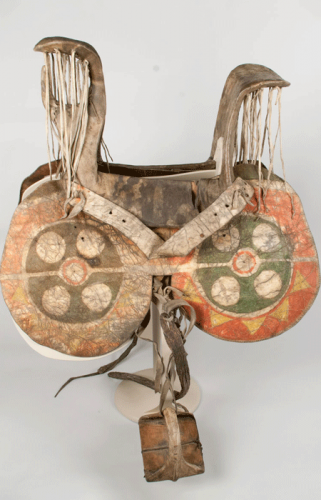 This women’s saddle, constructed from cottonwood/willow (portion of the stirrups) and covered in rawhide, is one of the artifacts from the Wetxuuwíitin’ collection. The saddle also includes “saddle fenders” made of bison rawhide, painted and original rawhide rigging. (Photo courtesy of the National Park Service and Nez Perce National Historic Park)

It has been said that “justice delayed is justice denied.” However, after a great injustice against the Nez Perce Tribe, the Nimiipuu people recently celebrated the correction of a grave injustice.

On June 26, 2021, tribal members celebrated the 25th anniversary of the return and the renaming of a collection of 21 Nez Perce artifacts crafted by Nez Perce men and women in the 1800s. This collection was renamed WetxuuwÍitin’, which means “returned home after a period of captivity,” and was another important step to help shed the colonial legacy surrounding the history of these items and reclaim this important part of Nez Perce culture.

According to the anniversary planning committee, the Rev. Henry Spalding, a Presbyterian missionary assigned to the Nez Perce reservation in 1836, worked to convince the Nez Perce people to convert to Christianity. As part of that conversion process, he urged — or perhaps forced — his followers to divest themselves of their traditional regalia.

Some of that regalia, which included clothing, horse accessories, bags and other items, were collected by Spalding and shipped to his friend and benefactor Dr. Dudley Peter Allen, in Kingsman, Ohio. After Allen’s death, his son, Dudley, donated the Spalding-Allen Collection to Oberlin College in 1893. Oberlin College, in turn, loaned most, but not all, of the collection to the Ohio Historical Society (OHS) for safekeeping, where it languished for decades. It was initially loaned to the Nez Perce National Historical Park (NPNHP) in 1980.

In 1992, the OHS asked for the loaned items to be returned. This request resulted in a series of loan extensions to the NPNHP and opened internal tribal discussions about how to keep the items where they rightfully belonged. Following a great deal of research and discussion, it was determined that the Tribe could not claim any of the items under existing federal law. Thus, a decision was made to launch a fundraising campaign to buy back the collection.

The items were collectively valued at nearly $600,000. The Tribe’s General Council established a committee to lead the fundraising effort. A Nez Perce delegation traveled to Ohio in 1995 and entered into an agreement with OHS to purchase the items, with a purchase deadline of June 1996.

By May 1996, the Tribe, with the help of more than 4,000 organizations and individuals from around the world, accomplished its goal. One item, a cradleboard that had been collected by Spalding, was not originally loaned to the NPNHP. In late May, the curator from the NPNHP traveled to Ohio to bring back the cradleboard.  Finally, the collection was together and now fully owned by the Nez Perce Tribe.

“We received an invitation to the renaming ceremony from the Tribe,” said the Rev. Sheryl Kinder-Pyle, executive presbyter of the Presbytery of the Inland Northwest. “I thought this was incredibly gracious and generous given our role in the history of these articles being taken away.”

The ceremony “was this beautiful event that joined various parts of the identity of the Nimiipuu people together,” Kinder-Pyle said. “It began with a ceremonial horse parade with appaloosa horses and warriors circling three times around the gallery with the warriors chanting and drumming.”

“Then they exhibited their patriotic identity with the color guard bearing the U.S. flag as a part of the color guard ceremony. It continued with the Lord’s Prayer being signed and said in the Nimiipuu language,” Kinder-Pyle said. “So, you have these three different strains of their identity coming together, all part of this ceremony. You could feel the drums reverberating inside of you and the warriors’ cries just enveloping the whole gathering. It was a sacred moment.”

Holy God, you honor us by calling us to be your people and sending us into the world to be your servants. May all those who suffer hardship due to natural disaster know the comfort of your Spirit. Prosper the work of the hands that reach out to help rebuild homes and lives. Amen.