A reverse offering is given to bless others 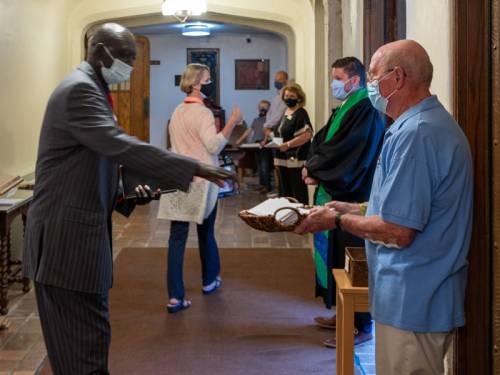 Since the coronavirus pandemic hit in the spring of 2020, many churches’ weekly offering figures are still not matching what they were two years ago. This shortfall has caused congregations to scale back many of their programs and, even worse, forced them to lay off staff. Westminster Presbyterian Church in Lincoln, Nebraska, though, is not one of those congregations. It has been experiencing sustained giving since the pandemic hit, so much so that it has been able to give back to its worshipers so that they can in turn also give back to the people and organizations in their community that need financial assistance.

During its fall kickoff this past September, Westminster Presbyterian held a “reverse offering” on consecutive Sundays in which it gave every household represented in worship an envelope with $50 in it to share with their neighbors. A few envelopes were also delivered to church members who were worshiping online so they could participate in the outreach as well. An estimated 100 total envelopes were distributed on those two Sundays, enabling $5,000 to go directly back into the Lincoln community and support other worthy causes. “For me, the hope was to give a sense of agency to people to give back as a way of saying not only thank you for your sustained giving and generosity, but also here’s what we want to be about,” said the Rev. Chris Peters. “We want to be a church that reaches out to people and a church that cares for people.”

The targets of the giving have stretched from an agency that assists individuals with car repairs to providing gloves and mittens for students at a nearby elementary school, to scholarship assistance at a presbytery camp to support Women Are Sacred, which provides mental health services to Native American women. One person donated their $50 to the Presbyterian Giving Catalog, and that idea expanded to others when they heard about this opportunity that they had not been aware of before. Peters, who has only been serving the church a little over a year, said that the goal of the reverse offering was to empower and encourage people to give in a way that spoke to what their own interests were.

“God’s grace has been working through this moment in the life of our congregation, and we hope to be stewards of that goodness that has been in our midst so that we can help others,” said Peters.

Peters didn’t rule out the possibility that someone in the congregation kept it for themselves. “If somebody had a need and kept it, that would be very reasonable,” he said. “We do have members who have had such needs, and that certainly would have been fine.”

The fact that Westminster has a surplus in funding certainly puts this congregation in the minority across the United States. But that’s a credit to the worshipers and their dedication to continue to support their church and its missions.

“The reason we were able to have a surplus primarily was due to lower costs overall throughout the year in 2020,” Peters said. “We just weren’t spending in program areas the way we would have otherwise. We continue to find ways to give to mission- and outreach-oriented things, but generally our members sustained the giving that they pledged to do.”

Peters and the session at Westminster Presbyterian had teased the reverse offering during the weeks prior to the envelopes being handed out, simply saying there was a surprise scheduled for worship on the second Sunday in September.

“We’ve received nothing but enthusiasm and gratitude from the congregation,” Peters said. “Since we started worshiping again in person, we’ve been emphasizing the concept of gratitude within our faith. Every week we have a moment of gratitude in our worship service where we name something that we are thankful for in the life of the church. In the response to the reverse offering, there has been a bit of gratitude. People are thankful for the opportunity.”

Lord, we lift up those in our communities who are struggling and dealing with terrible stress, abuse, depression or even thoughts of suicide. We pray for those ministering to them and that the vital ministry would continue. Amen.