‘It made me want to dance’ 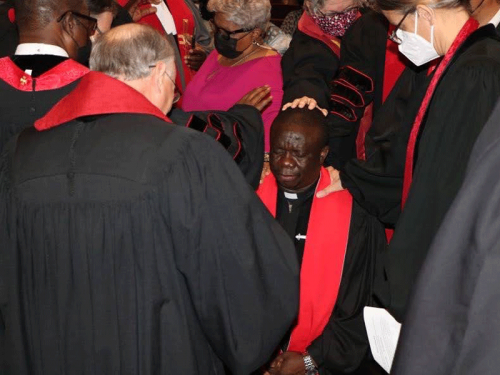 The Rev. Ebenezer Boateng is installed as the pastor during the chartering service for Presbyterian Church of the Redeemer in Houston. (Photo by Daniel Ahenkora)

Since arriving in Houston from Ghana, pastor Ebenezer Boateng has persevered through many ups and downs.

During its March 2020 meeting, the Presbytery of New Covenant agreed to charter Redeemer. But because of COVID-19, Redeemer would have to wait for the right time to hold a chartering service.

Finally, that right time occurred on Dec. 5, 2021, right before the omicron variant began sweeping across the country.

“It made me want to dance,” Hargrove said.

Boateng’s dream to create a PC(USA) congregation began in his Houston apartment in 2008. Coming to the city from Ghana, he’d spent two years getting to know others in Houston’s Ghanaian Presbyterian community. Then he began to gather people in his apartment for prayer and worship.

At first, Boateng worked with the Presbyterian Church of Ghana, where he was an ordained minister, to create this new worshiping community. But when things didn’t work out, he visited the Presbytery of New Covenant.

“I told the presbytery my story,” he said. “They welcomed and supported me with fellowship.”

This included a place to nest at St. John’s Presbyterian Church.

During this time, another Ghanaian community merged with Redeemer, which led to a leadership struggle.  By 2014, only a small remnant of people committed to growing a PC(USA) church remained.

Then, in the fall of 2019, the building the Ghanaians were worshiping in flooded. Unable to return to St. John’s — the building was in the process of being condemned — they had nowhere to go.

So, by March 2020, when the pandemic hit churches across the country, Redeemer had already started Zoom worship.

“Suddenly we were all over the world, spreading our wings,” Boateng said. “People from Africa joined us online.”

By fall 2021, Redeemer had moved to a new home at  ChristChurch Presbyterian in the Houston suburb of Bellaire.

The church’s pastor, the Rev. Kristy Vits, is in a Bible study with Boateng. After finding out that he was still trying to find space for Redeemer to worship, she told him the congregation could nest at no cost at ChristChurch.

“Why not? We have lots of land and a giant building on a huge campus,” she said.

When Boateng found out Redeemer could worship in the ChristChurch sanctuary — and that he could even have office space — he was overjoyed.

“It’s an answer to our prayers, like a dream come true,” he said. “It’s something we haven’t experienced together, until now.”

ChristChurch is selling a big piece of its land and using the proceeds to build a new multipurpose building to house all its ministries, including a daycare.

“If they like nesting with us, they can use our new building after we sell the land,” Vits said.

Before Redeemer officially nested with ChristChurch, Vits set up a meeting with Boateng and the Bellaire police chief.

“I didn’t want to insult the police, but they need to work on racial profiling,” she said. “I let them know what we were doing, that people who’d come from a different country, who don’t look the same as we do, are coming to our church — and that I didn’t want them making any trouble.”

Hargrove, the general presbyter, believes Jesus is rejoicing that Redeemer and ChristChurch have gotten together. When churches work on a nesting situation, she said, it’s critically important for it not to feel like a landlord situation — but more like a partnership.

“Redeemer doesn’t feel like they’re ‘less than’ now,” she said.

Vits acknowledges that ChristChurch is a small congregation that could have easily been closed. But after nine years of serving the church, she said it’s wonderful to get affirmation of the decision to hang in there.

Calling it an “unexpected and delightful surprise” to have another congregation with them, Vits said, “It’s the most fun I’ve had in 22 years of being ordained.”

Revised Common Lectionary Readings for Thursday, May 26, 2022, the Ascension of the Lord (Year C)

We thank you, Lord, for calling us to enter into the work that you are already doing. We thank you for the resources you have provided before we even knew we needed them. May we continue to glorify you as we together discern our call to specific ministries. Amen.