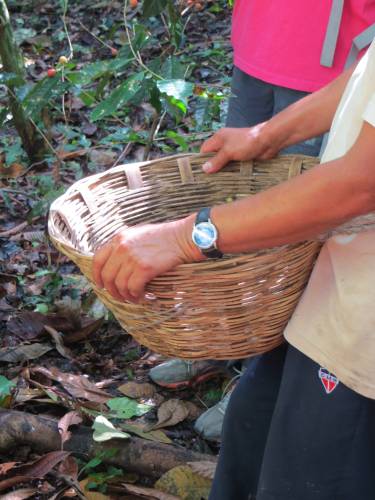 Farmer of the Café Justo coffee cooperative holds his picking basket as he explains the coffee growing process to a group of Presbyterians. (provided by Jessica Maudlin)

Ezekiel, the Israelite, lived in depressing and politically volatile times, 590 years before Christ. A hundred years before he was born, his country was conquered, first by the Assyrians, later by the Babylonians. Eduardo Perez Verdugo, the coffee farmer from Chiapas Driven from his homeland in search of work, lived in depressing and economically volatile Times, 2000 years after the birth of Christ. Both prophets in exile speak with anguish about Their similar plights and both plead for justice as they search for a vision of hope amid despair.

The prophet Ezekiel had a tough job. He was called by God to prophesy to the people of Israel, who had been living in exile for longer than they wanted to remember. These were the People who longed to be on their own land, who wrote the song that says, “We sat by the Waters of Babylon and we wept. … How can we sing the Lord’s song in a strange land?” It was a very difficult time when Ezekiel was writing his “complaints.” His country was a poor vassal state of Babylon. People did whatever necessary to keep themselves and their families alive. Most were slaves working to support the economy of their captors. Many had Been forced to migrate from their homeland into Babylon in order to do the undesirable work spurned by the ruling class in Babylon. Burdened by their loneliness and their lack of ability to improve their lives, while also Missing their homeland and its deep spiritual history, the people understandably felt depressed, isolated and desperate. Their lives were bleak and marginal. They wondered if There was any hope.

In the midst of this oppressive situation, the God of Israel appeared to Ezekiel. The Lord took him to a broad deserted valley filled with bones of the dead, very dry and very dead Bones — symbolizing his very desperate and quite dead homeland, and asked him, “Ezekiel, Do you believe these bones can live again? (Is there any hope for your country and your People?)”

Sitting in that seemingly lifeless place, trying, probably without much success, to imagine A better future for his country, he answered, perhaps politely, perhaps sarcastically, “Lord, Don’t ask me. You alone know. I’ve got no clue.”

In that very moment, with very few viable options for the present and with the future totally Unknown, God and Ezekiel struggled with the most important and, perhaps, the right Question — the question that was on everyone’s mind, “Is there any hope?” And, in the very act of asking the question, the dream found a voice.

Eduardo Perez Verdugo fled the lush mountainside of Chiapas in 1998 after Hurricane Mitch washed away much of his community. In a similar fashion, the dramatic fall in coffee and corn prices During the 1990s had already washed away much of the economic base of his community. The money he was making could barely provide for his children and wife and certainly could not be Stretched to cover the costs of rebuilding. Eduardo migrated over 2000 miles from Mexico’s border with Guatemala to the northern border town of Agua Prieta. He arrived in 1999 when there was still a lot of factory work available. Eduardo’s purpose was to earn enough money to rebuild His home in Chiapas and the church building that Hurricane Mitch Had destroyed. Eduardo found spiritual and material refuge with Lily of the Valley Presbyterian Church in Agua Prieta where he joined other people from the state of Chiapas who were also living In economic exile. Corn and coffee farmers, who had seen the prices for their products drop Dramatically in the early 1990s, had been drawn to the dry and dusty border town to find Employment. Agua Prieta offered people the prospect of being able To provide the basics for their families. Some brought their guitars and continued to sing The Lord’s song in this new and strange land — albeit in a minor key.

Just as the exiles in Babylon found a livelihood allowing them to provide for their families, So also the economic exiles who had fled their fields in the south of Mexico for the factories Of Agua Prieta found a livelihood. Like the exiles in Babylon, many of the economic exiles in Agua Prieta also longed to be home. This situation was a clear witness that “justice is not flowing like a mighty stream” in areas of the world where people can no longer support their families from the fruits of their labors.  The majority of these folks left their lands, not because they wanted to live on the border or in the United States, but because the price they received for their coffee and farm products had fallen dramatically.

Eduardo estimated it would take him two to three years of working 48 hours each week, at $50 a week, to earn enough money to return to the land he loved so much. During one of his breaks from work, a friend invited him to go to Phoenix to work on a golf Course where he would get paid $10 an hour. Eduardo declined the offer. The next day this Friend insisted that he come, as his cousin had secured two jobs for them. Again Eduardo Declined. The third day, the friend asked Eduardo how long he thought it would take for Him to earn enough money in the factory to return home.

On Oct. 4, 1999, Eduardo joined a group of Mexico’s poor attempting to cross illegally Into the United States.

Three days later Eduardo was back at the church building In Agua Prieta, battered and bruised both emotionally and physically. He had not achieved the “American Dream.” The limp in his walk testified to the twisted ankle and the banged knee he suffered falling down an embankment during his Night hike. The scrapes on his face gave witness to the tight passage through the unforgiving mesquite forests of the Sulphur Springs Valley.

Eduardo’s pained expression pointed to scars deeper than the physical ones that were most apparent. His group had been chased by the Border Patrol and because Eduardo was already Injured, he was easily caught. He tried to explain to the agent that the same blood Ran through both of their veins And that both had the same need to provide for their families. Eduardo received a kick to his face and a boot on his neck for his efforts. Eduardo had experienced the Sulphur Springs Valley surrounding Agua Prieta and extending up into Arizona as a valley of very dry bones—a valley of despair, a valley of fear, a valley of division.

After he shared his experiences, Eduardo reflected, “Salir de nuestra Tierra es sufrir,” which means, “To leave our land is to suffer.”

Experiencing forced economic exile was at the core of his suffering. All the other emotional And physical suffering paled in comparison.

The most amazing thing about this conversation with Eduardo was that he did not stop with the phrase “To leave our land Is to suffer.” He continued on to say, “If only we could control the sale of our coffee, we would be able to stay on our land.” In the midst of Eduardo’s pain and suffering, hope bubbled up in his being, a hope that the bones could live again, a hope that not only he but his community would be able to return to their land and provide for their families once again. Still battered and bruised, Eduardo became a voice of the Spirit of the Lord saying, “Maybe — just maybe — these bones Can live!”

Eduardo’s question was now clearly framed. “Is there any way to change this situation?” “Is there any hope?” “Will it ever be different for us?” “Can we ever return home to our families?”

In the process of asking the question, Eduardo gave voice to a dream … That posed a Challenge … That framed a vision … That led to the creation of Café Justo, a fair trade coffee cooperative that offers farming families in Chiapas the opportunity to remain on their land and support their families with dignity.

Dear God of Justice, forgive us for the ways in which we acquire goods without thought to the full human cost. We thank you for the prophetic voices that still speak to us today and makes ways for us to honor the dignity of our siblings. May our ears never close to your truth and our eyes never lose the vision for your Kingdom here on Earth. Amen.