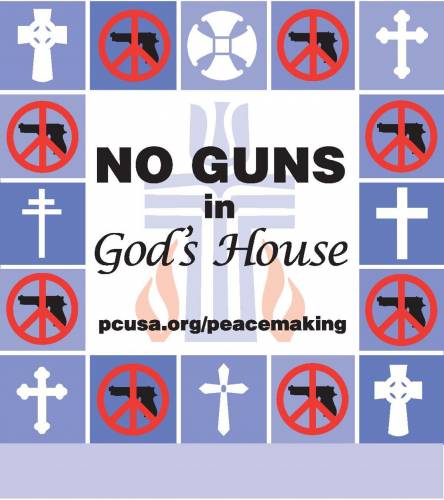 Gun violence is an issue that divides our nation, our political parties and our churches. Whenever there is an incident of gun violence, whether it be an accident or a mass shooting, people always return to the same debate: gun rights versus gun control.

However, the major issue with this debate is that it generalizes both “sides” of the argument. For example, not all gun rights advocates support anyone being able to buy military-style assault weapons. Likewise, the term “gun control advocates” does not accurately represent the position of the people categorized as being in that particular camp. A more accurate term would be pro-gun violence prevention, and not all supporters of this argument are entirely “anti-gun.” Many people’s views are quite nuanced.

This was the major topic of one of the Standing Our Holy Ground webinars, which focused on how to talk about gun violence in our churches. In that webinar, all of the panelists stressed the importance of language and preparation for a conversation about guns/gun violence/prevention in our congregations. One panelist, the Rev. Sarah Logemann, stated: “Preparation for the conversation is almost as important as the conversation itself. We need to talk about why gun violence is so hard to talk about. Talk about why our walls go up whenever we hear the word ‘gun,’ no matter what word comes after it. We often have a very visceral reaction to it and tune out after we hear it. We need to back up and think about what happens in our guts and our minds when we think about guns.”

As people of faith, we are called to be peacemakers. We are called to have tough conversations about tough issues and topics. This includes issues where people have a variety of opinions and experiences relating to it, such as guns.

But imagine a world, and a church, where those conversations can be had. If we are able to follow Rev. Logemann’s advice, we would not only engage in the conversation, but we would also prepare for it. We would take the time to ask what each other’s experiences are with guns. Some of us like to hunt. Some of us know people who were lost to gun violence. Some of us are afraid and believe that having the gun brings us security. But we do not know where each of us is coming from unless we ask and listen. Once we have an established understanding of each other, we can then work together to try to find solutions; solutions that are not only about the guns themselves and the violence they can be involved in, but solutions to why someone might feel the need to pick up a gun in the first place.

On this National Gun Violence Prevention Awareness Day, let us pray that our churches model the intentional conversations necessary to change the “gun violence debate.” We follow Jesus, who throughout the Gospels, repeatedly meets people where they are. He doesn’t wait for them; he goes to them. If we are to follow his example, we must meet each other where we are, even on difficult issues like gun violence. That doesn’t mean everyone will agree on everything. But we can agree to have honest, intentional conversation.

Dear God, we pray for a world free from the gun violence that takes, that destroys, that divides. We pray for real change, honest conversation, and true healing among your people. May we work together, with your guidance, to march down the path of peace. Amen.