CEPAD helps communities take charge of their own development 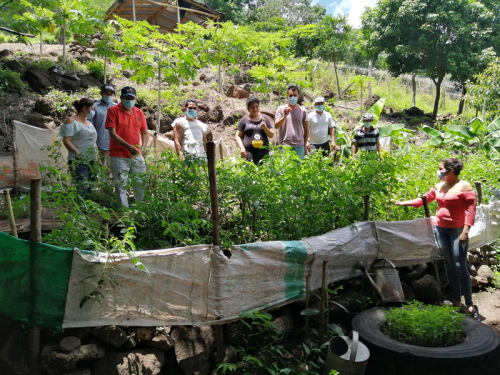 Maura, a mother and grandmother who lives in La Esperanza, Nicaragua, has benefitted from a family gardening program put on by CEPAD, a partner of the Presbyterian Mission Agency celebrating its 50th anniversary in 2022. (Photo courtesy of CEPAD)

This year, a longtime global partner of the Presbyterian Mission Agency, the Council of Protestant Churches of Nicaragua (CEPAD), will celebrate a significant milestone — 50 years of service to the people of Nicaragua.

In response to a major earthquake that hit the country, Dr. Gustavo Parajon founded CEPAD in December 1972 to provide emergency response. CEPAD is an organization composed of 70 denominations and churches in Nicaragua focusing on helping communities and individuals be in charge of their own development.

Tracey King-Ortega, who has served for 16 years as World Mission’s regional liaison for Central America, has worked closely with CEPAD during her entire tenure.

“What was unique about the response Dr. Parajon organized was that it was ecumenical,” she said. “It was different denominations coming together to serve their community in need. Working across denominational lines was so enriching that as the emergency response work wrapped up, those involved wanted to keep it going. They shifted their work to development, have been going strong for almost 50 years and have walked alongside more than 4,000 communities in the country.”

CEPAD’s mission is focused on providing faith-based training for rural Nicaraguans through programs in leadership, sustainable agricultural practices and economic development, allowing Nicaraguans to support themselves and their families in breaking the cycle of hunger and poverty.

Jose Acosta, a teacher who supplements his income by farming when there is enough rain, lives in one of the 40 villages that train with CEPAD. The village is surrounded by water and there is no bridge. During the rainy season, it can become too dangerous for his students to cross, so they miss school. Those rivers are also the only source of drinking water. He hopes that by learning better agricultural techniques they can better retain water during the dry season.

Maura, a mother and grandmother who lives in a village called La Esperanza, took part in CEPAD’s Family Gardening Program. In the past she assisted her husband as a laborer, planting corn, beans and sorghum in the traditional way. They also used harmful pesticides and burned land to clear it.

Since learning about CEPAD, she has attended workshops on planting, diversifying her crops and producing her own seeds. She was also taught how to make her own pesticides and compost by using available resources.

One of her accomplishments was building a micro-reservoir on her land. She collected stones, sand, clay and stakes. Her family helped her purchase 6 yards of black tarp to hold the water, which she used to collect 220 liters of water. Later, she and her husband invested in building a concrete water tank that holds 3,750 liters of water, giving her enough water to irrigate her crops during the dry season. Before the tank was built, she would have to walk to the river with 20-liter buckets she used to water her crops.

“In my ongoing accompaniment work with partners like CEPAD, ‘hope’ remains central to our conversations — not just the nature of hopes for the future, but how and where — and if — hope can be found in situations that engender despair,” said King-Ortega. “CEPAD continues to be a source of hope in situations of despair. I am excited to continue to walk and celebrate with them throughout their golden anniversary year. The fullness of life they bring to Nicaraguan communities, and by extension us, is a blessing and a gift and indeed a reason for celebration.”

King-Ortega considers her work with partner churches, seminaries and development organizations in Central America to be a gift.

“Their work is a testimony to the depths of despair and to signs of hope in a region whose destiny is closely intertwined with our own,” she said. “Learning about their realities and walking with them is an important way we, as U.S. Presbyterians, can be in solidarity.”

To support the ministry of Tracey King-Ortega, a gift can be made in her honor. Click here to give to mission personnel support. Mission co-workers are notified when a gift is made in their honor.