Scaling the truth and spreading reconciliation 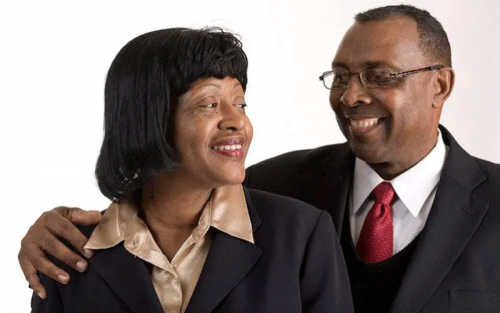 Just as they helped launch the nation’s first Truth & Reconciliation Commission in Greensboro, North Carolina, about 20 years ago, the Rev. Nelson Johnson and Joyce Johnson are making plans for a statewide effort they hope will become a national model.

The seven-member Greensboro Truth & Reconciliation Commission was empaneled following community divisions over the events of Nov. 3, 1979, when five people were killed and 10 were injured after an attack during an anti-Ku Klux Klan rally. Click here to read the executive summary of the commission’s 2006 report.

The Johnsons are co-executive directors of Beloved Community Center, which seeks to “guide Greensboro into a new era of equitable economic sufficiency, peace, social, gender and racial justice that can serve as a model and inspiration for ourselves, our region and our nation,” according to the center’s website.

“We’ve decided to revisit a successful endeavor,” Joyce Johnson said during the forum. “We feel called now” with the blessing of the Beloved Community Center’s Board of Directors. Nelson Johnson labeled the initiative the North Carolina Truth, Justice & Reconciliation process.

“We are a greatly divided and polarized nation. We are in a cold civil war” in which “we are throwing verbal grenades at each other,” he said. But “it is not unthinkable this dangerous period could descend into a hot civil war,” where states and regions “are thrown against each other in a violent clash. … The predicament we are in is not unthinkable, and we have to take it seriously. Preaching God’s truth is more important than it’s been in your lifetimes,” he said, “and maybe mine.”

The truth, justice and reconciliation process “is a human construct,” Joyce Johnson explained, “something we as humans can and must do. It’s everyday individuals and elected officials and religious leaders coming together and committing to speaking the truth in love.” The process in North Carolina has an advisory council that includes Sadler and the Rev. Dr. William Barber II of the Poor People’s Campaign.

“We think this is a piece of the way out of the situation we are in now,” she said. “It’s not the only way, but without the truth, we won’t be set free.”

“We need to have deep, deep listening,” she said. “We talk past each other, and we try to prove we are right and the other person is wrong. We have come to understand there is your way and my way. There has to be a third way that does not deny the truth and the sanctity of each one of us. … Who better than people of faith, who have heard a call from God to build God’s kingdom? Who better to step out and say, ‘Here I am; send me! I will go out into the neighborhood to build up that aspect of the Beloved Community.’”

“Instead of throwing in the towel and walking away,” Sadler told the Johnsons, “you have given us a path to do something about it.”

The Johnsons answered questions from listeners. Theologian Ched Myers wondered: What are some of the lessons you learned during the Greensboro experience?

“There was strong resistance to it,” Nelson Johnson said. “After that surge of resistance, there was a significant number of white brothers and sisters who came and joined the process. A challenge was there was not a desire to know the truth, but there was a desire to reconcile. That was a major problem in our process. What are we reconciling if we don’t face what it was that brought us to this moment?”

“One lesson we learned, and we knew it, but it was hammered into us by Archbishop Tutu and others, is that you need to be spiritually prepared for this work,” Joyce Johnson said. “Before every public hearing we had a spiritual gathering at a local church.”

God, your compassion for all your children is reflected in the lives of so many people in your church. We thank you for their quiet faithfulness as they minister, each in his and her own way, to those around them. Amen.