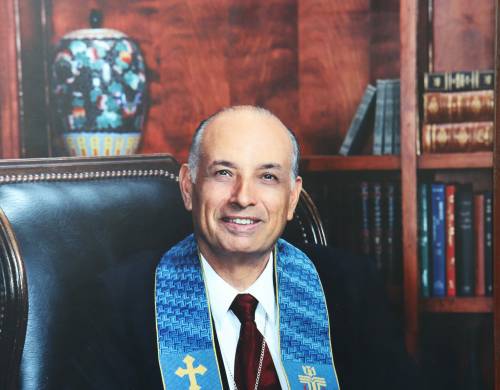 Twenty years ago, the Rev. Dr. Fahed Abu-Akel was elected as Moderator of the 214th General Assembly, making him the first Arab American to lead a major U.S. denomination.

Abu-Akel was elected moderator in 2002, after gleaning 269 votes from his peers. Upon taking the podium, he outlined three priorities for the denomination: spiritual renewal, a focus on local and global missions, and a commitment to cultivate unity in diversity. Abu-Akel shared stories of his childhood, his parents’ faith, his witnessing of the 1948 war in Palestine, and how these things affected his relationship with Christ.

Born to Christian parents in Kuffer-Yassif, Palestine, Abu-Akel was 4 years old when his family was forced from their village during the 1948 Palestine war. Several months after the initial exodus that saw over 700,000 Palestinian Arabs displaced from their homes, Abu-Akel and his family returned to Kuffer-Yassif to find that their home had been saved. However, five neighboring villages had been decimated. The following year, over 500 villages were destroyed by Israeli forces, creating nearly a million Palestinian refugees.

Abu-Akel arrived in the U.S. in 1966 to begin his schooling. In 1978, he became an ordained Presbyterian minister. That same year, he founded the Atlanta Ministry with International Students and became a U.S. citizen.

On the stage in Columbus, Ohio, Abu-Akel continued his speech. “You may be afraid,” he began, as he transitioned to the topic of faith, saying that Presbyterians face many challenges. “It’s OK to be afraid,” he went on. “I remember that 4-year-old boy who discovered, and is still discovering, that Jesus Christ is the only hope for a broken world.”

Heritage Sunday is a day of celebration set aside by the General Assembly of the PC(USA). To celebrate and learn more about the history of Presbyterianism in America, visit history.pcusa.org/hs.

Gracious God, we thank you for lifting up a multitude of voices testifying to the power of your presence in our strife-filled world. Guide us as we listen and as we act. Help us to embrace fully your hope for this broken world. Amen.