‘This is our story’ 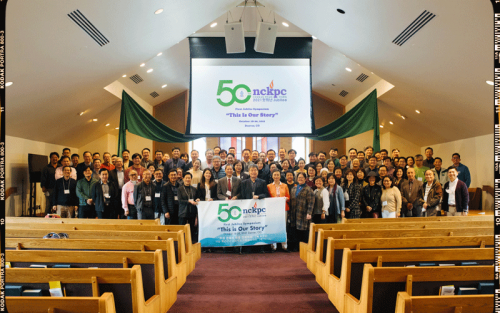 “This is Our Story” was the them of the Jubilee Symposium of the National Caucus of Korean Presbyterian Churches. (Contributed photo)

To celebrate the first 50 years of the National Caucus of Korean Presbyterian Churches (NCKPC), the organization held its Jubilee Symposium, “This Is Our Story,” last fall.

Dr. Russell Jeung, co-founder of STOP AAPI (Asian American Pacific Islanders) HATE and an expert on Asian American hate crime, addressed the issue of the rise of anti-Asian racism in the United States.

The Rev. Gun Ho Lee, pastor of the Greenville Korean Presbyterian Church in Winterville, North Carolina, and a member of the Jubilee Preparation Committee, said, “The 2021 Jubilee Symposium of the NCKPC provided an opportunity to enlarge the NCKPC’s tent through intercultural learning led by various Asian leaders. The organization was strengthened by intergenerational cooperation between the first-generation and the second-generation leaders.”

Lee says the symposium challenged the NCKPC to think outside of the box and do such things use English, not Korean, as the event’s main language. “The invitation of non-Korean, particularly other Asian speakers and most of all, the co-planning of the symposium between the first-generation and second-generation leaders, meant a great deal to the NCKPC,” Lee said.

The Rev. SuYoung Kim, education pastor of The Korean Church of Boston and also a member of the preparation committee for NCKPC’s First Jubilee Symposium, said, “As a first-generation pastor of a Korean immigrant church, this was an eye-opening experience for me. I now realize the power of our stories — the stories of great Korean Americans who left their birthplace and relatives, like many in the Bible, and made America their home in the face of many challenges. These are the stories of Asian Americans who had been discriminated against and condemned then later joined to build the country together and tried to become a part of the blessing for the country, and the stories of Asian American kids who look just like my kids (they are girls!) having grown into bold and bright leaders finding their own voices, places, and meaning in America.”

When asked what he thought was accomplished at the Jubilee, the Rev. Samuel An, senior pastor of The New Hope Church of Michigan, in Redford, Michigan, and a member of the group, replied, “Over the course of more than a year, many leaders of the Korean-American caucus [NCKPC] were praying and looking at where we had come from to discern our path for the next 50 years. We looked at our history and saw too much pragmatism and not enough prophetic self-critique within our churches. We repented of neglecting to work on generational divides, the marginalization of many women, the needs of those outside the church, and a lack of partnership with other churches. I believe the work of the committee did much to prepare the hearts of many leaders for the messages we heard during the symposium.”

“This Jubilee is a sign of hope for the future,” said Lee. “This means that the NCKPC is no longer a gathering of the first-generation pastors and elders, but it means that intercultural and intergenerational fertilization is possible.”

Many women played a key role in the planning and execution of Jubilee Symposium. Ruling Elder Hu Nam served as chairperson of the Jubilee Preparation Committee. However, there are not many Korean women pastoring Korean churches.

Dear God, let us not become complacent in our daily lives but see instead the many ways we can reach out to others in our own community every day. Amen.