More than 70 children are enrolled in two sites, and the program is growing 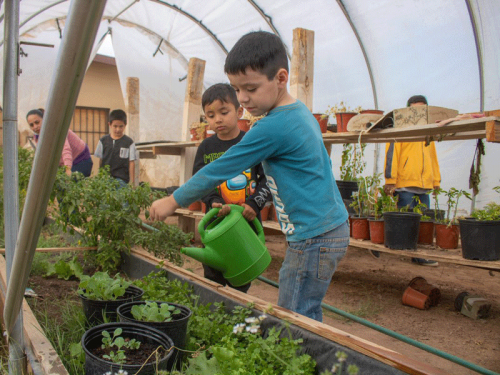 Children work in the permaculture garden near the U.S.-Mexico border. (Photo by Ammi Robles)

The children were being divided into groups for activities, G-1, G-2, G-3. But Jaciel wanted the grown-ups to know that G-2 meant something very different to him and to the children who live around the Community Center.

“When the response of a 6-year-old community member is ‘hitman,’ we know that we are in the right place,” wrote Adams in a recent letter. “Jaciel taught us what we did not know and confirmed once again both the importance of the ministry we have with the children who are at risk of dropping out of school in elementary school and the importance of our continuing to immerse ourselves in the life of the community and to learn.”

Adams said that in conversations with the children about what they wanted to be when they grew up, “sicario” was a possible career path for them.

“Organized crime not only targets younger and younger children to consume and traffic drugs, but also to become hitmen,” he said. “And children who drop out of school are more likely to enter more directly into this violent environment. A recent article in the Arizona Daily Star highlighted that there are 37,000 children in juvenile rehabilitation centers after having been arrested and convicted of violent crimes, including murder, on behalf of organized crime. Children as young as 12 trained to murder.”

That’s one of the many reasons he believes in the importance of and need for the Children’s Enrichment Center, which was created to provide academic, nutritional, emotional and spiritual support to children who are at risk of dropping out of school and being consumed by a culture of violence.

In 2021, the center expanded to work with DouglaPrieta Trabaja (DPT), the women’s cooperative. Mission co-worker Miriam Maldonado Escobar taught the children about permaculture. DPT donated a piece of land to build a classroom for the children.

Permaculture is a form of agriculture based on ideas such as crop diversity, natural productivity and sustainability.

Adams talked about Matilde, one of the leaders of the cooperative who teaches hands-on permaculture classes to the children. Matilde’s initial reaction was somewhat guarded, knowing the land, which initially wouldn’t even grow weeds, was not producing enough chard, squash, beans, corn, tomatoes and peppers to share.

“But I am happy because we are now going to dedicate this space to cultivate the intelligence, talent and creativity of the children of the community,” Adams quoted Matilde, “and we are also going to teach them to cultivate food in their homes. This piece of God’s Creation will no longer grow vegetables, but it will be a place where our children grow, and they will bear fruit in our community and our community will be transformed.”

The need for the enrichment center shows itself to Adams and Escobar on a daily basis.

Recently, they dropped off their 14-year-old son, Nathan, at CATPSIC, the drug rehab center they have partnered with for years. A woman named Esthela and her children were also there to attend the same birthday party. She is a graduate of the drug rehab center and has been sober for more than seven years. She dropped out of school and started using drugs at 12.

“One of the most humbling, moving and sobering moments of our ministry here was when Esthela asked us to help lead her quinceañera (15th birthday) worship service in the rehab center,” said Adams. “When she was early in her recovery, she participated with others in the permaculture class that Miriam led at DouglaPrieta. She said, ‘I wish I had an opportunity when I was a kid; perhaps I would not have gone through the horror I went through.’”

Adams said life for children in the shadow of the drug culture is dark. But they are grateful for the prayers that help them sustain this life-changing ministry.

Gracious God, we thank you for your transforming power through our Lord and Savior Jesus the Christ. We pray for your protection for those in need and strengthen us through your power. Amen.