Tracey occasionally returns to the U.S. and is available to visit congregations. Email her to extend an invitation to visit your congregation or organization.

In July 2005 Tracey King came under appointment for the third time as a PC(USA) mission worker, this time to serve as regional liaison for Central America. In her new role Tracey helps create better communication between World Mission, mission personnel, partner churches and PC(USA) congregations interested in ministry in Central America. She has a special focus on programs of reconciliation and peacemaking.

Tracey is based in Managua, Nicaragua, but travels frequently throughout all five Central America countries in which the Presbyterian Church (U.S.A.) has denominational partners: Costa Rica, El Salvador, Guatemala, Honduras and Nicaragua.

Geographically close to the United States, Central America receives more mission teams — of all shapes, sizes and philosophies — than any other region of the world. Presbyterian World Mission has worked hard to facilitate healthy mission models of partnership for our congregations and presbyteries drawn to this impoverished region. These models must include in-depth analysis of how the United States is intertwined with current political, economic and social realities in both positive and negative ways.

Though Catholicism is still the majority religion, over the past couple of decades the evangelical church has grown. Coming from a reformed tradition, the PC(USA) partners with other reformed denominations in the region, accompanying them to strengthen their gospel witness in meaningful ways in their respective country contexts.

In Tracey’s previous appointment to mission service by the PC(USA) she was seconded to the Council of Evangelical Churches in Nicaragua (CEPAD) in Managua, Nicaragua, from 1999 to 2003. Her work with CEPAD involved helping churches and church people in the United States relate to Nicaraguan churches, mostly by organizing and coordinating travel seminars and study tours. She cultivated the development of long-term, committed relationships of solidarity, accompaniment, friendship and spiritual growth between churches in the United States and churches in Nicaragua.

Tracey helped CEPAD connect with the ministry of SIPAZ, the International Service for Peace, which accompanies divided communities as they work toward peace and reconciliation in Chiapas, Mexico. This work has been important to Tracey since her experience in Chiapas as a participant in the PC(USA)’s Reconciliation and Mission Exchange Program.

During her year with the Reconciliation and Mission Program (1997–1998) Tracey was assigned to Mexico’s southernmost state, Chiapas, to work with CEDECH, the State Committee for the Defense of Evangelicals in Chiapas. She led delegations, translated documents, and produced bimonthly bulletins and other educational materials.

Tracey’s service in Central America helped her discern a vocation in peacebuilding and reconciliation, so when her term of service ended in June 2003, she entered a master’s degree program in conflict transformation at Eastern Mennonite University in Harrisonburg, Virginia, graduating in May 2005 with a concentration in restorative justice.

Tracey is a lifelong member of St. Peter’s by the Sea Presbyterian Church in Rancho Palos Verdes, California.

Watch a video of Tracey King-Ortega 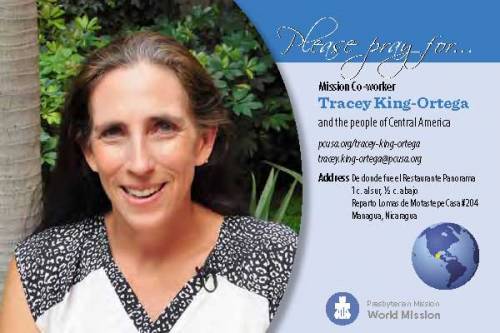 Use this card as you pray for Mission Co-worker Tracey King-Ortega. The card includes a photo of her and an overview of her work. As regional…

Give in honor of the ministry of Tracey King-Ortega