Some Protestant pastors preach on topic, but many leave it to others

Close to half of all Protestant senior pastors have recently preached on racial reconciliation and more have publicly prayed about it, but few find that their congregations are urging them to address the topic. 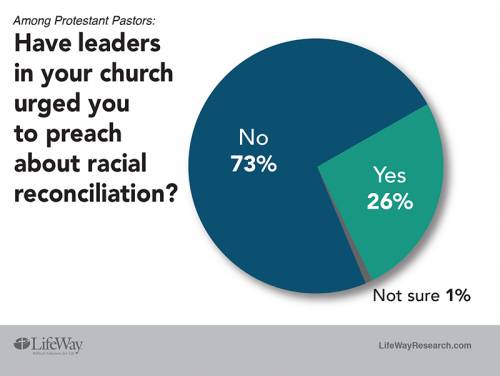 A 2016 LifeWay Research survey also finds that most pastors have not addressed economic inequities in their communities or joined a public lament about racial injustice.

“It seems like most congregations are eager for somebody else to do the work of reconciliation,” said Scott McConnell, executive director of LifeWay Research, “rather than embrace it for themselves.” 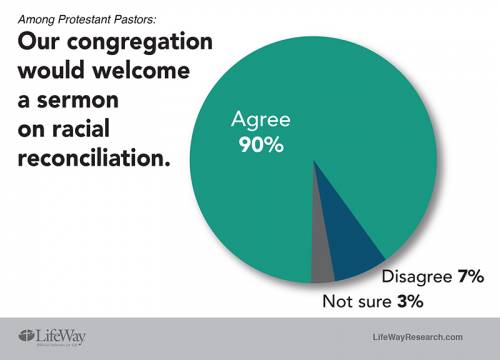 Pentecostal (93 percent) and Baptist (92 percent) pastors are more likely to say that their congregations would be open to a reconciliation sermon. But they’re less likely to have been asked by church leaders to preach one. Just 17 percent of Baptist ministers and one-fifth of Pentecostal pastors said they’ve been urged to preach on the subject.

Similar numbers of Presbyterian/Reformed pastors (92 percent) are likely to say that their churches would welcome sermons on reconciliation, but 37 percent have been urged to give one.

Mainline pastors are more likely than their evangelical counterparts to have been encouraged to preach a sermon on racial reconciliation (38 percent vs. 22 percent).

Other findings about Protestant senior pastors:

The phone survey by the Nashville, Tennessee-based evangelical firm was conducted Aug. 22–Sept. 16, 2016, and had a margin of error of plus or minus 3.2 percentage points.

Redeeming and restoring God, we give thanks for the varied ministries of the church. Help us to make good use of the skills and talents as we share in the building and rebuilding of Christ’s church. Amen.