Self-Development of People ministry visits with the people of Belize 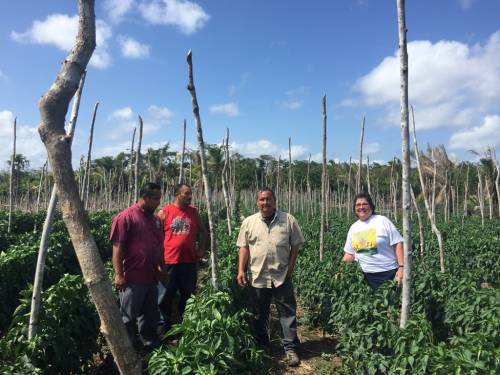 Nago Bank Cooperative’s Chair Ruben Alexander Pineda (second from left), along with cooperative officers in the fields with Rebecca Reyes, a member of the International Task Force visiting Belize. (Photo courtesy of SDOP)

An international task force from the Presbyterian Committee on the Self-Development of People (SDOP) recently returned from a visit to Belize, where it met with groups that have received funding to become more self-sustaining. SDOP selected Belize as a focus country in 2010 because of its continued struggle with extreme poverty.

“I heard and saw gratitude on the faces of the people we visited. They expressed their love for the land and the desire to do things that bring forth life,” said the Rev. Rebecca Reyes, SDOP National Committee chair.

SDOP has been making annual visits to Belize, working mainly with grassroots communities in the southern part of the country. The efforts have focused on building relationships with communities in the Stann Creek and Toledo districts, which include mainly Mayan and Garifuna people — descendants of Caribbean Indians and African slaves.

In the past six years, SDOP has provided approximately $175,000 in funding to groups in Belize, seeking to generate income for their communities, mostly in agriculture.

“The first time we were there, many of the Mayan groups didn’t want to talk with us,” said Teresa Bidart, SDOP’s meeting planner. “They were so quiet in the past and didn’t want to speak because they were not used to people helping them. This time, they were all talking with us.”

Since 2010, at least 12 groups have received funding to build sources of income. Groups visited this year include the Trio Farmers in Development Pre-Cooperative, which works with a local school to teach children to grow vegetables, and several agricultural cooperatives. On average, each group receives approximately $20,000.

“The people now are much more confident. One organization, the Marigold Women’s Group, runs a restaurant and used the funding to purchase freezers so they can sell ice,” Bidart said. “They are finding new, innovative ideas to grow their businesses and are very confident.”

The task force says that not only are businesses growing, relationships among groups are starting to form. 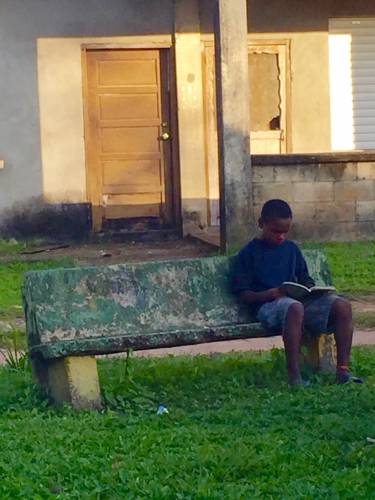 A boy in a very poor village in Belize takes time to read. (Photo by Rebecca Reyes)

“Collaborations are being strengthened, and community trust is the foundation of the work and progress being made,” Reyes said. “They also acknowledged the consistent work it takes to keep the progress going. Imagination is always at work, and creativity is all around.”

Over the years, many of the organizations have become self-sustaining and no longer need the SDOP support.

“I am reminded of the biblical story of the child who presents two loaves to Jesus to feed the 5,000. SDOP is giving its two loaves, which is a minor contribution to the needs and hunger of so many,” Reyes said. “However, I believe the key to that story is that in giving the two loaves, others also began to give, which made the feeding of the 5,000 possible. The gifts of the people make a difference.”

Self-Development of People can provide funding for these and other projects that change lives because of your gifts to One Great Hour of Sharing.

God of compassion, we pray that the people confronting poverty in Belize will continue to find ways to overcome it. Through our prayers and gifts, may they be blessed! In the name of Jesus Christ, we pray. Amen.