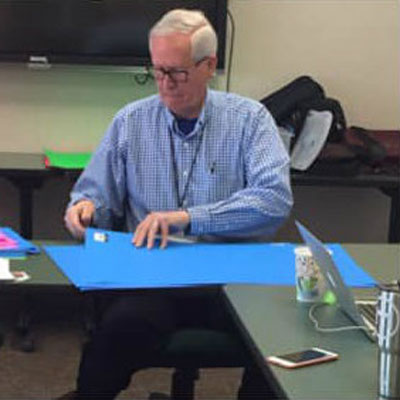 At 72, the Rev. Gregg Dana is the oldest volunteer at the 2019 Presbyterian Youth Triennium. (Photo by Samantha Hassell)

Despite having worked in youth ministry at two Presbyterian Church (U.S.A.) congregations before becoming a marriage and family counselor, 72-year-old Gregg Dana has never attended Presbyterian Youth Triennium (PYT). He could’ve gone to the first two Trienniums in 1980 and 1983, but he was serving large PC(USA) churches with active summer programs.

“Triennium sort of didn’t fit into what we were doing,” he says. “I very much regret now that we didn’t go.”

Still enthusiastic about youth ministry following his retirement, Dana applied to serve on the 2019 PYT production team.  Grateful to be accepted, he’d expressed interest in serving on the small group ministry team. Part of that team’s responsibility was putting together content for the 200 small groups that meet to engage in Scripture — and the 100 leaders who will staff them.

“This is where the voice of youth is actually heard,” he said, “where they get a chance to speak back, respond, ask questions and express doubt. I would’ve loved to have had something like that growing up.” 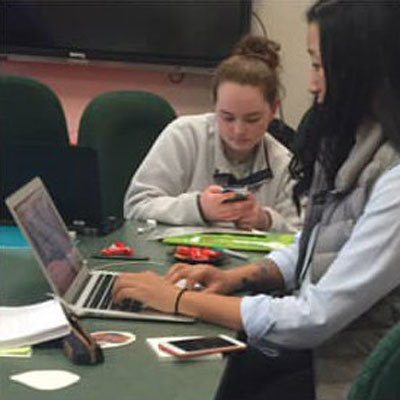 The Rev. Theresa Cho, at right, works on the small group leaders manual that’ll be used during the 2019 Presbyterian Youth Triennium. (Photo by Samantha Hassell)

“It’s what my family does,” says Dana. “My daughter, dad and brother were all editors. It’s just the way our brains were organized; it’s a genetic thing. The manual was Theresa’s creation. I just put commas in, that kind of thing.”

But Cho, who describes her creative process writing the manual “as just you and your own brain writing it,” knows better. She’s grateful for the input of the entire team, including Dana’s editing help.

“He has gifts I don’t,” says Cho, who preached at Triennium in 2013. “Theologically trained, he was very good at looking at the instructions and activities for the small groups, to make sure they made sense with what I was trying to accomplish.”

Cho worked closely with worship and recreation team ministry coordinators to incorporate more seamlessly what they were doing into small group activities and discussion. Instead of just asking questions with a hoped-for outcome in mind, she wanted to develop a process by which youth could find a nugget, a thread of inspiration — even an epiphany.

But above all she wanted Triennium youth to think critically about the passages of Scripture with which they’d be engaging.

“It’s kind of like they are detectives finding out the who, what, when, where and why of each Scripture passage,” she said. “I want them to look at it through multiple lenses and then ask, ‘what does this say about not only the story, but about God?’”

Seeing the resources and people — both staff and volunteers — on the production team has convinced Dana that if he’d taken the kids from the churches he served to Triennium years ago, it would’ve taken his youth ministries to a whole new level.

“I’m talking with pastors of bigger churches here in Twin Cities now telling them to not miss out,” he said. “I don’t care if they’re taking their kids for summer mission trips. Nobody could give them an experience like Triennium every three years.”

It’s an experience that moves people like Samantha Hassell, one of the small group ministry team leaders, nearly to tears every three years.

“It’s the magnitude of this event,” she said. “How many people it takes to pull off an event for 5,000 individuals? So many people doing one job.”

“That we can set up this community and pull off this event, that starts with an idea, a spark — that’s an amazing testament to the power of the Holy Spirit,” she said, “who is in the details.”

The Presbyterian Youth Triennium is supported by your gifts to the Pentecost Offering.

O God, we pray that your Holy Spirit will guide and direct our paths. Open your hearts and minds to new opportunities to be your hands and feet in the communities in which we live. May we strive to embody, ever more fully, the character of your Son, Jesus Christ. Amen.