Behind every New Worshiping Community is another community that offers prayer and financial support to these emerging centers of Christian witness. 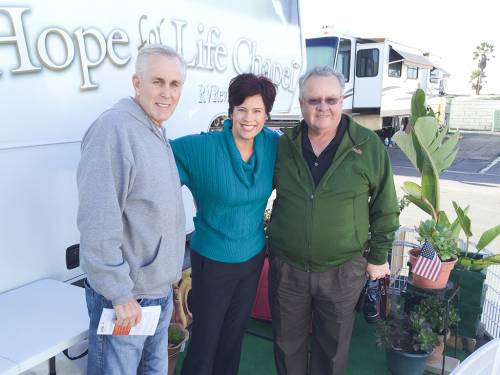 Myron Hughes doesn’t worship at the Hope for Life Chapel RV Park Ministry, but supporting its transformative work has been a life-changing experience for him.

Hughes, a member of Laguna Presbyterian Church in Laguna Beach, California, loves the traditional church. He never expected to be involved in fostering a worshiping community where pews, a pipe organ and a chancel are not to be found. Yet his attitude changed when he encountered Hope for Life Chapel, which is just 15 miles from his congregation.

“What I’ve learned from RV Ministry,” Hughes says, “is that the work of the church is on the street; it is in the workplace, at the park and on the beach. Churches in the future won’t always be in a building, and that’s OK.”

The director of Hope for Life Chapel, the Rev. Tamara John, moved into the RV park six years ago to start the ministry. She builds relationships with its residents using her customized fifth wheel trailer with a chapel in the back as her ministry base.

In the park, she encounters people from various walks of life. There are vacationers, oil rig workers, migrant workers and traveling nurses, as well as unemployed people and others who are down on their luck.

“Such people are often reluctant to engage the community because of a lack of trust or a belief they won’t be in the park for long,” John observes. “For these and many other reasons they are not going to go to a church, so I bring church — and the gospel — to them.”

John strives to build community “by getting residents out of their shells and talking with one another.” She estimates it takes 10 days to two weeks before she can gain enough trust to have a lengthy conversation with a new resident and often a year or more before people really begin to open up.

When trust is built, John feels free to talk with residents about the gospel and how it relates to their life situations. This was the case with a park resident who moved there three years ago and introduced himself as “the General.” He drank heavily and earned a reputation as being loud and crude. Nevertheless, John spoke with him nearly every day.

Health problems began to plague “the General,” and during a three-hour conversation with him, John posed a poignant question: “Have you had enough of living life your way?” It was not long until she saw his life start to change.

“He started telling people in the RV park how he had experienced God’s love,” John says. “He also became one of the community’s top volunteers. He really wants to grow closer to the Lord.”

John says she has witnessed “hundreds” of transformations, but none would have been possible without the people who have “invested in this ministry financially and in many other ways.” She considers Hope for Life Chapel’s supporters part of the ministry. “I share this work with them,” she says. “It is their ministry, too.”

While Hughes enjoys hearing about the ministry’s impact in the RV park, he says his most persistent reminder of its influence is within himself. “Our gifts to RV Ministry have accomplished something in my heart, and my wife’s heart,” Hughes says. “Lou Ann and I started out as the givers and now find ourselves receiving much. We love making a difference in this way.”

God of love and hope, we thank you for Jesus Christ and for the hope that he offers us. Give us your Spirit that we may know Christ and make him known, giving thanks to you in all things. Amen.