Fifty years ago, Dr. Martin Luther King Jr. delivered a speech that provided the foundation for this year’s theme at Compassion, Peace and Justice Training Day. Speaking at Riverside Church in New York, King provided a connection between the war in Vietnam and the civil rights movement.

King said there needed to be a “radical revolution in values” to address what he called the giant triplets of racism, extreme materialism and militarism. Speakers and workshop leaders at CPJ Training Day in April told attendees that the issues addressed in 1967 are still relevant in 2017. 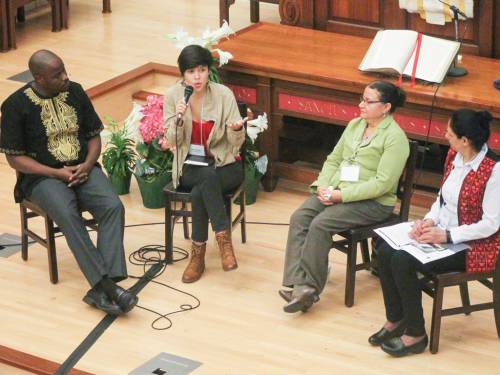 After worship and messages from the Revs. Kevin Johnson and Floretta Watkins, more than 260 attendees took part in a series of workshops. Among them was “Antiracism: Next Steps,” led by the Revs. Mark Koenig and Alonzo Johnson.

“Racism is historical, cultural and institutional. Slavery is historical. Culturally, it is passed from generation to generation. Some things we’ve made acceptable,” Johnson said. “We’ve made it OK to commodify and dehumanize people.”

Johnson referred to redlining as institutional racism. His examples included the practice by some real estate agents to prevent people of color from moving into certain neighborhoods and banks refusing to grant loans.

Koenig told the group that the issue of privilege has nothing to do with guilt. But he asked attendees what they were willing to give up with that privilege.

“How do we use the privileges we have to disrupt the system on race, sexism? Advocacy is one thing we can do,” Koenig said. “There are no voiceless people. The task of advocacy is to amplify and find the appropriate platform for all people to speak and have their voices heard.”

The Rev. Adan Mairena, pastor and director of West Kensington Ministry in Philadelphia, led a workshop titled “From Broken Windows to Open Doors: The Role Churches and Communities Can Play in Building Relationships with Law Enforcement.”

Mairena urges churches to be a faithful voice of inclusion to the whole community and police, providing a safe place for all sides to get together and talk about the issues. “When I hear that a police officer has been shot or is dealing with a particular problem, I call and tell them I’m thinking about them and that means the world to these officers,” he said.

The Rev. Jimmie Hawkins, director of the Office of Public Witness, said there is a genuine desire by people to make positive change.

“The spirit of God is working everywhere, and there are people who are just committed to this and want this world to be a better place,” he said. “It’s inspiring to know you are out there doing everything you can to bring forth a better day for children and adults.” 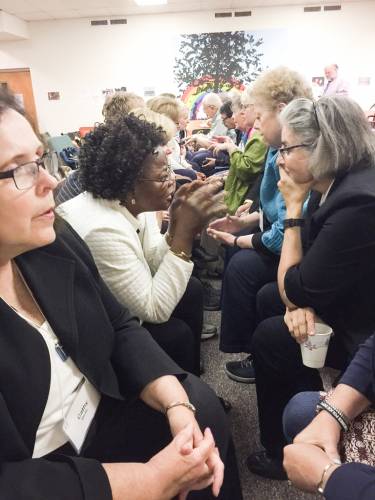 Watkins, pastor of Seigle Avenue Presbyterian Church in Charlotte, North Carolina, urged the attendees to keep marching, singing and boycotting. “Think about how Christ’s resurrection totally shook up the Roman empire. You’re about to shake up the empire in 2017.”

“The plenary was good at getting at the heart of the deep spiritual issues we are facing and addressing the kind of transformation that we need,” said Catherine Gordon, representative for international issues at the PC(USA) Office of Public Witness.

Holy God, we long for the day when the leaves of the great tree in your city will heal the nations. Help us to be agents of your healing to the broken and rejected — in inner cities and suburbs and small towns, both in the United States and around the world. Amen.