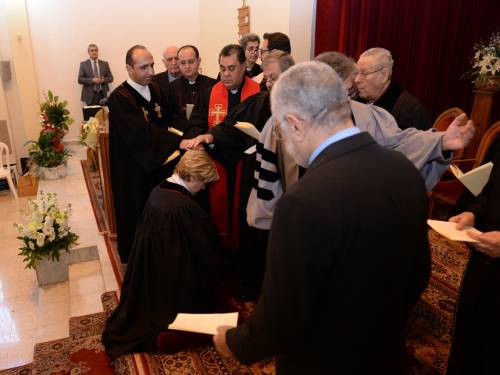 Rola Sleiman is ordained as a minister of word and sacrament. (Photo provided)

Though we often hear only the dark and disturbing stories coming out of the Middle East, Presbyterians there recently celebrated a historic milestone. The Presbyterian Church in Tripoli and the National Evangelical (Presbyterian) Synod of Syria and Lebanon (NESSL) have ordained the Rev. Rola Sleiman as the first Arab woman to serve as a minister of Word and sacrament.

After graduating in 1997 with a bachelor’s degree in theology from the Near East School of Theology (NEST) in Beirut, Sleiman moved to the Bakaa Valley in Lebanon to serve as a Christian educator. In 2001 she returned to Tripoli to work at the Presbyterian Church and teach ethics at the evangelical school.

In 2006, when the pastor of the church immigrated to the U.S., Sleiman was appointed by the synod as the unofficial pastor at the congregation’s request. She received her preaching license from the synod in 2008 to make the appointment official and has carried out all the duties of a pastor except for baptism, Communion and performing marriages. Now she can carry out the full duties and responsibilities and is well-received among her colleagues — both Christian and moderate Muslim. She continues to work toward completing a master of divinity degree.

“This has been a long and slow conversation,” Sleiman said, “and this is good, because everyone has come to see over the years that this gentle way of opening up a new practice has made for a more peaceful acceptance.”

Sleiman was born and raised in the Tripoli Presbyterian Church. She graduated from the Evangelical School in Tripoli when it was still in the old quarter of Tripoli, down the street from the church. The school is well-known and loved by both the city’s Muslim and Christian residents. Many of its Muslim graduates have gone on to serve as moderate political leaders, taking the lessons they learned in school about peaceful and respectful coexistence and seeking to embody that in the political landscape of Lebanon.

Even as the city has grown more religiously conservative since the 1960s, with a small portion of the population now holding radicalized views, the church and school continue to have a strong and positive relationship with its Sunni Muslim-majority neighbors. When violence was common between the two factions several years ago, Muslim neighbors always made sure to check on Sleiman. 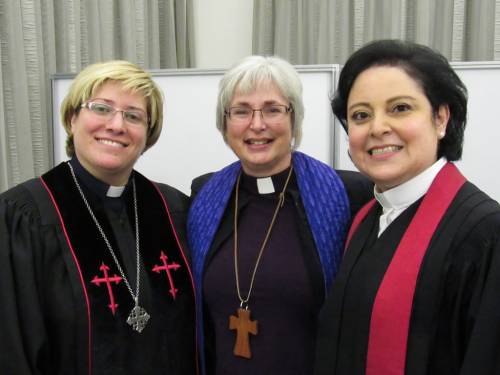 One month after Sleiman was ordained, Najla Kassab of Lebanon became the second woman to be ordained to full pastoral service in NESSL. Kassab earned her MDiv from Princeton Theological Seminary in 1990. Her husband, Joseph Kassab from Syria, also studied at Princeton.

When the Kassabs returned to Lebanon, they began working in Christian education at the synod level. Through workshops and conferences, they encouraged the ministry of women and built on the theological training at NEST. In 1993, the synod’s executive committee and administrative council formed a committee to prepare Najla for receiving a preaching license — the first offered to a woman. She accepted the license and has worked with the women and children of the synod for the past 24 years.

“Women have proven themselves faithful servants of God in the synod. We have done a lot of grassroots-level work over time. We have had four women licensed as preachers since 1993, and now two of us are ordained. This is setting the track for the future not just here in Lebanon, but we pray in the region as well,” Najla Kassab said. Protestant church representatives attending her ordination from Jordan and Egypt said they look ahead with hope to the day when their church bodies will also ordain women.

Gracious God, we thank you for the witness of the church. We ask that your mighty hand uphold those who answer your call to service and guide them as they seek to serve you. In the name of Jesus we pray. Amen.