A cause ‘worth protecting’

Ohio church’s commitment to the environment dates to the 1990s 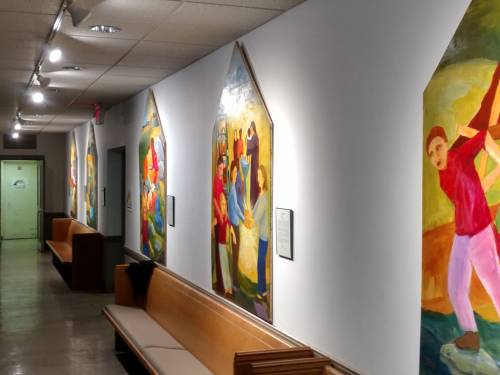 Fairmount Presbyterian Church has implemented a number of energy-saving measures including new lighting and improved building maintenance that have resulted in a $10,000 a year savings. (Photo by Keith Mills)

Conserving energy and caring for the environment are not new tasks for Fairmount Presbyterian Church in Cleveland Heights, Ohio. Since the mid-1990s, the congregation has been committed to finding ways to cut energy costs while improving the environment in its own community.

“Our first Earth Keepers group took on several projects, from recycling paper to switching out incandescent bulbs with fluorescents,” said church member Keith Mills. “There is a creek alongside the church that we’ve cared for and we have a garden outreach program and have worked with the community to maintain one of its garden sites.”

When Mills became involved, the church’s budget was tight and supporting various ministry programs was becoming difficult. That’s when members began looking at other ways to generate dollars for programs.

“My background is in engineering so I was pretty sure we could do better than what we were doing, so we founded our own earth stewards group in 2008,” he said. “I wanted to have a practical and faithful side and felt it was very important that we make an impact in the church through energy savings.”

Mills said the church expanded its recycling program to include the collection of metals and plastics, established water conservation programs with rain barrels and took on several other causes.

“We had an unemployed building manager who joined the trustees at the church and he went right to work in our facilities,” Mills said. “He found that one of our water pumps was leaking hot water, literally sending money down the drain, so he insulated all of the pipes. We also did an energy audit and had an inspector review our facilities. He gave us a list of things to improve.”

As LEDs came along, the church began replacing existing lights and found them to be not only practical, but cost-effective as well.

“Our building manager also started working with the church on how to operate the building and reduce expenses by lowering the temperatures, especially in rooms that were overheated,” Mills said. “Lighting has been something we’ve really focused on improving.”

Mills believes the work over the past 10 years has helped change the mindset of the church around facilities and utilities.

“We’ve saved about $10,000 a year on energy costs by being more efficient with our electrical and gas consumption,” he said. “The savings go into the general fund, taking the pressure off raising money for mission projects. It makes it easier for us to expand our projects.”

Mills recently traveled to Shepherdstown Presbyterian Church in West Virginia to learn how that church has utilized solar power.

“I was blown away by the church’s spirit. There was nothing that was going to stop them,” he said. “When I talked with the team that had been working on solar energy, they were very creative and found a way to make it happen.”

While solar power may not be in the immediate future for Fairmount, Mills says it is something to think about for the future, and he also had some advice for churches that are considering ways to care for God’s creation.

“I would advise that they become aware of what nature does for us,” he said. “I’m sitting in a car looking at the trees in front of me, just being aware of the beauty of everything and the desire to sustain it because it sustains us. God’s creation is beautiful and is worth protecting.”

Gracious God, whose loving care spans every aspect of our lives, help us discern and honor the myriad ways we are connected to you, your people and your creation. Amen.