Some of the challenges that churches and society faced 50 years ago are still challenges today, attendees at Ecumenical Advocacy Weekend learned. More than 200 members of the Presbyterian Church (U.S.A.) joined other denominations this spring for a weekend of worship, workshops and activism, a few short blocks from the Pentagon. 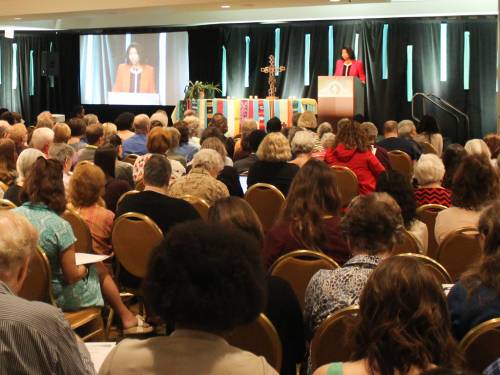 The 2017 theme, “Confronting Chaos: Forging Community, Challenging Racism, Materialism and Militarism,” was based on Dr. Martin Luther King Jr.’s speech at Riverside Church in New York in April 1967. In his speech, King said “the giant triplets of racism, extreme materialism and militarism” were the principal challenges of the time. Organizers of this year’s advocacy weekend say those words still ring true.

“When Dr. King spoke of the giant triplets 50 years ago, who would have believed we would still be facing the same giant triplets today?” asked Sharon Watkins, chair of the board of the National Council of Churches. “Yet racism thrives. The killings of black and brown lives are still a reality today. We are here to say ‘enough’ to the chaos of racism. We intend on being a part of the community of building justice, inclusion and hope.” 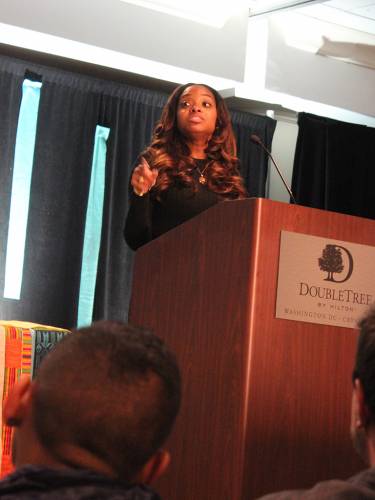 The keynote speaker for the opening plenary was Tamika D. Mallory, co-chair of the National Women’s March in January that drew more than 500,000 people to the nation’s capital. Mallory told the crowd at Ecumenical Advocacy Days that the church “needs to do more” to meet today’s social justice challenges.

“Do we really get it? Do we understand that some of us are part of the problem?” she asked. “If we can own that, perhaps we can be and do what is necessary to move this country toward the beloved community we are seeking.”

Mallory said the past presidential election was personal to families across the country, referring to those who grew up in poverty or  in violent homes or those dealing with mass incarceration.

“There are disproportionate amounts of people in races and classes that are affected in ways that many of us will never experience.   There are people in jail right now for a crime they didn’t commit and no one is there for them,” she said. “When I was little, the church was the first line of defense.”

Mallory told the crowd that young adults were doing what many in the church are “afraid to do” and urged the church to provide a collective response.

“It doesn’t mean sitting behind the computer or meeting in the basement of a church. It means going out there and standing between them and that which they fear the most,” she said. “Young people are on the street corners, trying to protect their own communities because we have left them to do it all by themselves.”

Mallory said the church needs to recapture its prophetic zeal or it will become an irrelevant social club with no moral authority.

“When I’m marching, I’m looking around asking what happened to the church. There may be some in here willing to put their bodies on the line for an issue, but it’s not enough,” she said. “Discomfort is what this is all about. If you say you are an activist and your stomach is not in knots, you’re not doing it right.”

“There is so much at stake right now,” said Eric Mitchell, director of government relations for Bread of the World. “In the 20 years I’ve been on the Hill, I’ve never seen such a tremendous threat to so many programs that save millions of lives than what we are seeing right now. God is calling us to be here at this critical moment.”

The Rev. Dr. John C. Dorhauer, general minister and president of the United Church of Christ, spoke on “Overcoming America’s Possessive Investment in Whiteness.” He addressed wealth, education and income disparities between whites and people of color.

“It is chosen ignorance that allows you to perpetuate the privileges you have because of the color of your skin,” he said, referring to white Americans. “It’s time to take down the veil of ignorance and see what needs to be seen.”

God, awaken us to our complicity in the problems of our world. Make us aware of needs and injustices far and near, and show us how to use the gifts you’ve given us to addresses those issues. In Jesus’ name we pray. Amen.