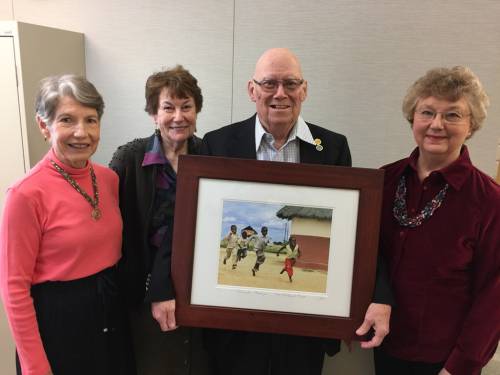 Five representatives of the Congo Mission Team at Lafayette-Orinda Presbyterian Church (LOPC) recently traveled to Sacramento for a meeting with the staff of Kamala Harris, California’s new junior senator and former attorney general. They were joined by two members of Congo Prosperity Catalyst, a Bay Area organization for Congolese nationals in diaspora.

LOPC, 20 miles east of San Francisco, formed a Congo Mission Team in 2012 “in response to the tragic conditions in the Democratic Republic of the Congo (DRC), particularly the suffering of women and children.”

The goal of the meeting was to let Harris know her constituents and the Presbyterian Church (U.S.A.) are concerned about the people of the Congo, and explain why Congress should have an interest in justice and peace there.

With roughly 70 million people the DRC is the second-largest country in Africa, sharing borders with 10 countries. Despite vast mineral reserves, extensive forests and enormous potential for hydroelectric power generation — estimated to be half of the continent’s total — the DRC had the world’s second-lowest GDP per capita in 2016.

Over the past two decades, militias and rival factions have clashed for control of Congo’s government and resources, which often end up in Americans’ cellphones and other electronic devices. More than 5 million people have died in this period as a result of fighting, poverty, dislocation and disease. Last year, Congolese nationals were the largest group of refugees seeking entry to the United States.

The Congo Mission Team focused the senator’s attention on a series of actions taken by the General Assembly of the PC(USA) expressing support for democracy, human rights and transparency in extractive industries in the Congo.

The delegation asked Harris to work for democracy, peace and human rights in the Congo by:

Harris’ deputy state director, Melanie Ramil, commended the team for clearly identifying U.S. interests in the Congo, the actions they hoped the senator would take and potential allies in Congress and civil society.

In preparing for the visit, the LOPC team also communicated regularly with other members of the Congo Mission Network Advocacy Team — including Jeff Boyd, regional liaison for Central Africa — along with the PC(USA) Office of Public Witness in Washington, D.C., to develop their key messages and to ensure that their message was consistent with the views of PC(USA) global partners in the Congo. They also spent several weeks planning their presentation and handouts with their allies from Congo Prosperity Catalyst.

The LOPC Congo Mission Team believes their visit has laid a foundation for a continuing working relationship with Harris’ office. “We were invited to connect with the senator’s international policy staffers in Washington and to talk to Sen. Harris’ scheduler about meeting the senator when she is in California,” team member Sue Gibbons said.

Gracious God, in all places where darkness seems to prevail, we pray that your light would shine. Raise up your children to share the good news that even when resources seem few, you nourish many. Restore your people so we may know light and life through your son Jesus. Amen.