Wisdom. That’s one of the things the Rev. Jacob Duché prayed for at the first Continental Congress in 1774 — wisdom in forming a nation.

Prayers for wisdom and unity continue in the United States, including on the National Day of Prayer, which first took place by presidential proclamation in 1952 and has been held on the first Thursday in May since 1988. The largest participation in National Day of Prayer events to date, in 2016, included millions of people praying together for our country during more than 48,000 interfaith gatherings in churches, parks, state capitals, stadiums, civic centers and many other locations, according to the nonprofit National Day of Prayer Task Force. 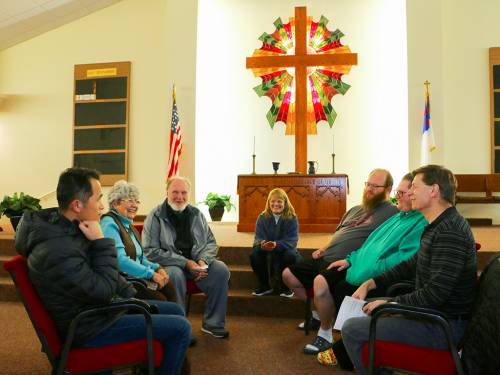 The Rev. Al Earley coordinates National Day of Prayer events in Oldham County, Kentucky, as part of his responsibilities as president of the Oldham County Ministerial Association. Earley, pastor of LaGrange Presbyterian Church, remembers that attendance at the noontime and evening prayer events in 2015 were the largest since the events held after the terrorist attacks of Sept. 11, 2001.

“Clergy and laypeople led bold prayers at the noontime gathering at the county courthouse in LaGrange, none of which were prepared in advance,” Earley said. “They cried out to God to heal our nation.”

The evening gathering in 2015 was held at a community center and included a diverse group of people representing many denominations. “They prayed for denominational, racial and socioeconomic reconciliation.”

Afterward, he said, several people expressed a desire to keep on praying.

“I told them I would agree to start a prayer gathering at LaGrange Presbyterian if people would commit to pray for revival no matter how long it takes,” Earley said, meaning a powerful movement of the Holy Spirit that the entire body of Christ will recognize just as the early church did at Pentecost (Acts 2). “A core group of committed souls agreed. As God knit us together over the next year of quarterly gatherings, our prayers were quite meaningful.”

A Korean pastor who attended one of the quarterly prayer gatherings suggested that the group meet monthly.

Now, on the first day of every month at 7 p.m., a cross-section of Christ-followers representing churches of various denominations gather at LaGrange Presbyterian to pray for spiritual revival. Over the past several months at least 44 people have attended the monthly prayer gathering at least once.

“I believe in the power of prayer to usher in revival,” Earley said. “I don’t think it matters how many are praying, as long as there’s more than me.

“I’ve been praying for revival in a separate small group of pastors for 19 years. At times the group has dwindled down to two people. Yet I’ve experienced personal revival by praying for revival for nearly two decades. Now I have a better understanding of who God is and my place in God’s work.”

To those who ask for advice about starting a regular prayer group, Earley says, “You have to come to a personal place where you know prayer is important to God, be willing to make a commitment to pray and be ready to accept that there will be times when attendance at the prayer gatherings will be light.

“God calls us to pray … to stand in the gap for our communities,” he adds. “We don’t know when God is going to answer our prayers for revival, but as we wait for God to answer, revival will happen to each person who prays.”

Gracious God, we give you thanks for allowing us to take part in building a kingdom in which all people are equal. Amen.