First Hands and Feet group comes to town from MSU

A group of MSU students and their campus minister, Neil Myer, were recently the first of what Nelson hopes will be many groups to go to St. Louis, the host city for the 223rd General Assembly (2018), to engage with communities in need through PC(USA) community outreach ministries in Giddings-Lovejoy Presbytery .

“We don’t want the Presbyterians to be simply another convention that comes to town, meets and spends some money, and then leaves without engaging the people and communities there in a sustained effort to support our Presbyterian brothers and sisters in making an impact,” Nelson said.

So how did the inaugural Hands and Feet engagement by the MSU UKirk group go?

“My hands are dirty,” one student said during a May 9 break.

“My feet are tired,” added another.

“But maybe that’s what it’s all about,” one young man responded. 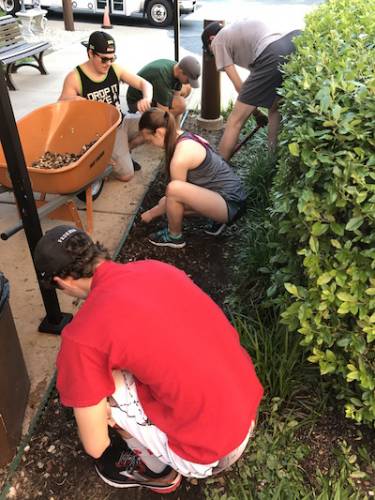 “Hands and Feet” participants work on a landscaping project as part of their week of service and learning in St. Louis. (Photo by Jerry Van Marter)

The group had spent the morning learning about the many “food deserts” in St. Louis, where access to affordable and nutritious food is a daily struggle. Then, under the supervision of the Rev. Peggy Harris, a retired United Church of Christ minister, they helped prepare a community garden at the St. Agnes Senior Community.

Harris, who resides at St. Agnes, applied for and received a modest grant from a nonprofit called Gateway Greening to install the community garden. One of the grant requirements is that residents put in 30 hours of volunteer labor each month to maintain it.

“These young people are such a boon,” Harris said, “because most of our residents are not able to work much. I hope they learn the joy of volunteering and the joy their volunteering brings to others. They did more in one morning than I could do in a month!”

During the afternoon of May 9, the group traveled to the International Institute of St. Louis, the only officially sanctioned refugee resettlement and service operation in the city. Housed in a former Catholic girls’ school, the sprawling facility houses a staff of more than 100 and many classrooms and other learning and service areas. In 2016, the institute resettled more than 1,200 refugees and provided a broad array of services to countless others — from English classes to a store that sells goods at low cost and the Global Farm, where refugees can learn to grow profitable crops for the St. Louis market. 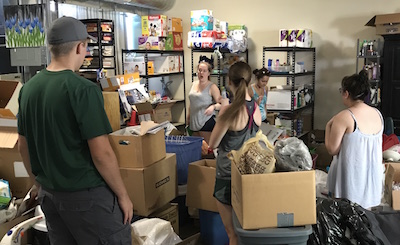 Students from UKirk at Michigan State University sort through donations to the International Institute of St. Louis as part of their “Hands and Feet” experience. (Photo by Jerry Van Marter)

The UKirkers spent the afternoon sorting through the store’s merchandise and stocking its shelves while also making space for another load of donated supplies that was arriving by truck later in the day.

The previous evening the group participated in Churches on the Streets, an ecumenical family dinner outreach program for the homeless. Elizabeth Drerup said she loved playing with the children who came. “I learned that all children love to play and be with others,” she said, adding that the sustained effort envisioned in the Hands and Feet initiative is critical. “It’s really important that the church is here on a consistent basis, that people know we care when we are here and when we are not.” 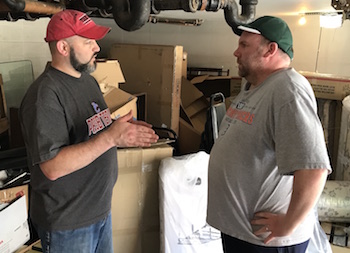 Yeager-Buckley said he hopes many other groups will catch the Hands and Feet vision. “When space is created for community to be created and gather, walls come down,” he said.

The Hands and Feet initiative was formally launched this month at the 2017 Big Tent gathering on the campus of Washington University.

For more information, visit the Hands and Feet website or contact Yeager -Buckley at Andrew.Yeager- Buckley@pcusa.org or 502-569-5419.

Great God, we give you thanks today for our young people. May we continue to find ways in our churches, our homes and our communities to gather them, teach them, listen to them and inspire them. In Jesus’ name. Amen.