Combating the stigma of HIV and AIDS

“The world may think that the HIV pandemic is under control, but trust me: It is not!” warned Debra Mwale, convener of the Chikondano HIV and AIDS Committee of Zimbabwe’s Church of Central Africa Presbyterian (CCAP) Harare Synod. Mwale, a nurse who does HIV testing and counseling, observed that while “people now know about HIV and preventive measures, they still have not accepted that they must change their behavior.”

The United Nations estimates that 1.4 million people in Zimbabwe are living with HIV — about one in seven  ranging in age from 15 to 49. Although anti-retroviral therapies have become much more widely available in Zimbabwe and other Southern African nations, AIDS is now the leading cause of death among teenagers in sub-Saharan Africa. As a result, one of the UN’s Sustainable Development Goals seeks to end the epidemics of AIDS, tuberculosis and malaria by 2030. 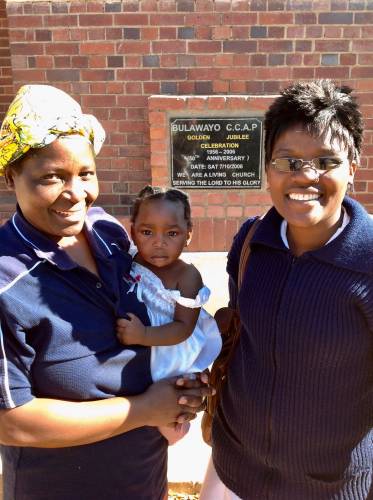 Achieving this goal will require the involvement of a range of actors, including the church. Mwale feels that churches have a particular role to play in combating stigma. “When we set up the Chikondano desk, our aim was to target the stigma in the church,” Mwale said. Chikondano (a Chichewa word that roughly translates to “mutual love”) sought to help pastors and their spouses better understand HIV and AIDS and talk about the illness in ways that were not stigmatizing.

The stigma can have deadly consequences, Mwale said, “In my congregation, two people died in the space of three days because they were being hidden. We didn’t even know that they were sick,” she said.  “As I am a nurse, I realized that they were suffering from HIV and AIDS, but their relatives never told the pastor.”

Mwale believes that many people still fear that they will be judged by their pastor or fellow congregants if they are open about being HIV-positive, which is why Chikondano focuses on helping pastors “tackle HIV issues in their sermons in a way that makes somebody feel welcome and feel like coming out in the open.” Only then can the church encourage people to be tested, to know their status and to make healthy choices.

In 2016, the 222nd General Assembly of the PC(USA) acknowledged “the continuing threat posed by HIV and AIDS, particularly in sub-Saharan Africa,” and recognized the “current window of opportunity for eliminating the serious public health threat posed by HIV” as envisioned by the UN.

“Thanks to advances in science and medicine, we have the knowledge to end HIV and AIDS as public health threats by 2030,” the assembly said. “If, during the next five years, we do what we know how to do, then new infections will steadily decline. But if we fail to act during the next five years, the disease will come roaring back and new infections will start to rise again.” The difference between these two scenarios is 28 million new infections, per UNAIDS estimates.

The assembly urged World Mission to continue to accompany and encourage global partners, such as the CCAP Harare Synod, as they raise awareness of HIV and AIDS and promote appropriate responses, including stigma reduction.

Presbyterians in the U.S. can support the efforts of Chikondano and the CCAP Harare Synod through prayers and gifts.

Creator God, giver of life, we give thanks for your boundless grace and mercy. May all who suffer illness experience your healing touch and comforting embrace. Enable your people to work together to be channels of your love and compassion, reaching out as Christ did, to all who feel rejected or excluded. Amen.