When John Weaver composed a hymn in 2000 for the rededication of Madison Avenue Presbyterian Church’s remodeled sanctuary, he had no idea that the hymn would be part of a celebration of his own life years later.

The hymn, written by Fred R. Anderson, proclaims, “Surely the Lord is in this place.” And earlier this year, hundreds raised their voices to sing Weaver’s composition as part of a gala concert honoring his 80th birthday in the very place that Weaver loved and served for 35 years.

“John Weaver’s contributions to Presbyterian worship and music have been profound and will long endure,” said the Rev. Dr. David Gambrell, associate for worship in the Presbyterian Mission Agency’s office of Theology and Worship. “Generations of worshipers are now familiar with his harmonization of beloved hymn tunes, among numerous other original works and arrangements. We are grateful for his creative and faithful service to the church.”

Greeted with thunderous applause, Weaver was affirmed by Andrew E. Henderson, his successor at the church, as “a wonderful teacher and an influential composer.” Weaver served as the church’s director of music and organist from 1970 to 2005. He also served as chair of the organ departments of the Curtis Institute of Music in Philadelphia (1972–2003) and the Juilliard School in New York City (1984–2004). Upon his retirement in 2005, Weaver continued to give concerts and lead workshops and master classes around the world. His published works are still widely performed. 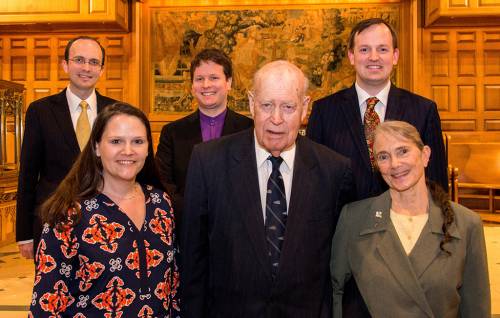 Weaver, who was seated at the front of the sanctuary with his wife, Marianne, was then celebrated with a program of his own organ and choral compositions, along with organ works by Mozart and Brahms, performed by his students and successors: Paul Jacobs, chair of the organ department of the Juilliard School; David Enlow, organ faculty, the Juilliard School; Henderson, director of music and organist; and Mary Wannamaker Huff, associate director of music and artistic director of the New York City Children’s Chorus at Madison Avenue. Together, Henderson and Huff shared in conducting the church’s choir.

“It is overwhelming to consider the life of John Weaver — as a performer, as a teacher, as a composer, as a dedicated church musician, as a father and as a friend,” Jacobs said in introducing his selections. “This was a gentleman in every sense of the word. What filtered into my own philosophy of teaching (from John Weaver) was to encourage students to develop their own musical signature in their artistry and in their playing.” 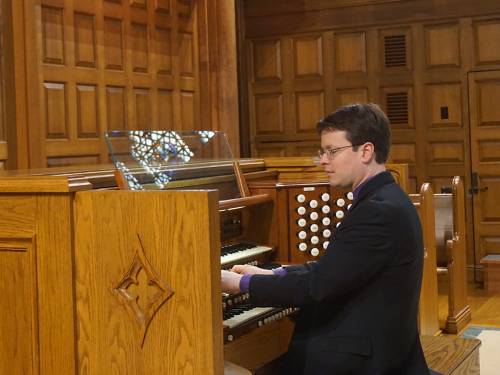 Paul Jacobs rehearses prior to the concert. (Photo by Emily Enders Odom)

Gesturing toward Weaver, with whom he studied at the Curtis Institute, Jacobs closed by saying, “I owe you more than I can ever say. It is such an honor to be here to celebrate your 80th birthday.”

The celebration’s proceeds were earmarked for the capital campaign of the Presbyterian Association of Musicians (PAM) called Remember Well the Future, in honor of Weaver’s distinguished career and longtime devotion to PAM, which was represented at the event by Eve Hehn, interim executive director; Huff, a current member of PAM’s executive board; and others.

God, remind us to love and serve one another always. Open our hearts so we too will know that we have enough loaves to share. Amen.