‘Global justice for all’ 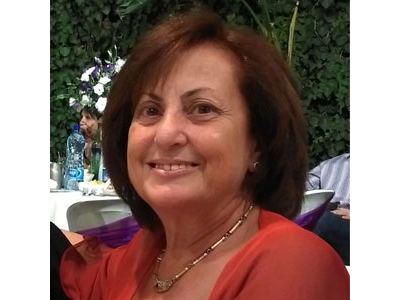 Presbyterian churches and institutions will soon have the opportunity to hear what it is like to be a hometown refugee. Nora Arsenian Carmi is one of at least 15 individuals who will be visiting Presbyterian churches, mid councils and other institutions this fall as part of the 2017 International Peacemakers. The group will be speaking between Sept. 22 and Oct. 16.

Carmi was born in Jerusalem, Palestine, a few months before the establishment of Israel. Since 1967, she has been a permanent resident of East Jerusalem. Conflict is something Carmi is very familiar with, considering her Armenian heritage. Her family survived the Armenian genocide of 1915.

Learning about her Armenian heritage helped Carmi face ongoing oppression and the continued dispossession in the Holy Land. She says the ongoing conflict between Israel and Palestine is a challenge she faces daily.

“Striving for a just peace for all peoples, starting with the Palestinian people in the area, has been my driving force, working in a multi-religious region monopolized by Judaism,” she said. “Until my retirement in 2016, the greatest work challenge was being able to empower the community to follow a steadfast, nonviolent resistance and living one’s faith according to the will of God. I continue to serve God and community.”

Carmi attended Catholic schools and Protestant universities, married a Christian Orthodox Palestinian and served as a community builder in various religious and security civil society circles. She worked with the YWCA, Sabeel Ecumenical Liberation Theology Center and Kairos Palestine for more than 37 years. She remains closely connected with World Council of Churches assemblies and events and participates in several global church involvements.

Carmi says people in the region are faced with many challenges — the lack of human and national rights, access to movement, education and worship, and the absence of will for a just peace.

“In the wider region, the challenge is replaced by international attempts for changing the map of the Middle East, a biased support to the state of Israel, economic interests, the rise of extremism and the sad phenomenon of refugees,” she said. “In the immediate context of the region, we promote education, awareness building, direct involvement in the community and advocacy to put pressure on the churches for a sound theology and governments abiding by international law.”

Carmi says she’s grateful for the support of the Presbyterian Church (U.S.A.) through the resolutions pertaining to economic measures and responsible investing, as well as the support for Palestinian rights.

She looks forward to the opportunity to share her experiences with the church this fall.

“I will speak of the situation in our region and repeat the call of faith, hope and love from the Palestinian people to the world. I will also speak about global justice for all,” Carmi said. “I will also be calling upon our human obligation as brothers and sisters, created in the same image of God, and reminding people to preserve the dignity of everyone.”

Carmi says that 2017 constitutes a milestone in the history of her region: 100 years after the Balfour declaration, 70 years after the establishment of Israel and “the Palestinian catastrophe” and 50 years of Israeli occupation. “I hope to remind the congregations and U.S. government that speaking truth to power is an obligation if we want to be blessed peacemakers. With God’s help, we can together bring about a positive change.”

Lord, help us to be instruments of your grace: constant in our love, unrelenting in pursuing peace and faithful in working for justice for all. Amen.