In one of the most dangerous places in the world, the Rev. Peter Tibi stands between the government of South Sudan and rebel factions with only his clerical collar and his faith for protection.

The director of RECONCILE International (Resource Center for Civil Leadership) uses shuttle diplomacy to carry information between the two groups with the goal of discouraging armed conflict, negotiating humanitarian access and preventing revenge killings. There is so much distrust, the two groups will not even agree to direct discussions.

And so Tibi travels.

Since South Sudan’s birth as a nation in 2011, over 50,000 people have been killed, more than 1.9 million have been internally displaced and 1.8 million have fled the country. Under the threat of international sanctions President Salva Kiir signed a peace agreement with rebel leader and former Vice President Riek Machar in August 2015. Machar returned to the South Sudanese capital of Juba in April 2016 and was sworn in as vice president. Just three months later, violence broke out again between the two factions, and both sides blame the other for violating the ceasefire.

“We remain hopeful,” Tibi said in a Skype conversation. “Jesus said he would be with us always. Engaging people in peacemaking also brings them hope. Our work is a bridge connecting people.” 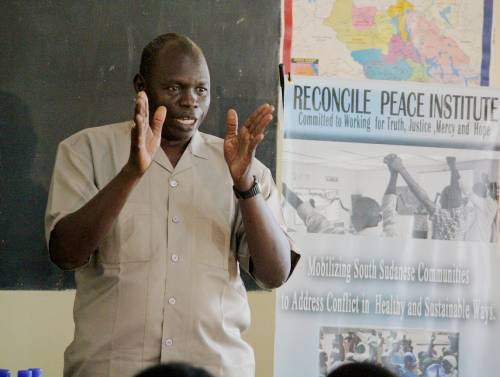 RECONCILE held training sessions in April and May for government, police and prison representatives, to help them  understand the peace process and work toward peaceful coexistence skills in mediation. They hoped for 40 people, but more than 115 attended.

Unfortunately, the conflict rages on. Near RECONCILE’s home in the city of Yei, more than 1,700 houses have been burned. RECONCILE’s staff has evacuated to IDP (internally displaced persons) camps in South Sudan and refugee camps in Uganda where they continue to teach peacebuilding skills.

The Revs. Shelvis and Nancy Smith-Mather, mission co-workers for the Presbyterian Church (U.S.A.), have not yet been able to return to South Sudan so they have moved to Arua, Uganda, to help RECONCILE carry out its work in the refugee camps, Rhino Camp Refugee Settlement and Bidi Bidi Refugee Settlement. Mission co-worker Leisa Wagstaff was evacuated from South Sudan a year ago, but has returned to continue training teachers, sometimes in refugee camps.

The Rev. Debbie Braaksma, coordinator of the Africa-area office, knows the people and the challenges well. She and her husband served as mission co-workers in South Sudan for five years, and her work now takes her back to South Sudan regularly.

“The people of South Sudan have every reason to feel hopeless and afraid,” she said. “Many believe the country is on the cusp of full-scale genocide. But each time I visit, I am privileged to hear story after story of faith, resiliency and courageous action. I cannot help but be hopeful.”

But the people of South Sudan now have even more to worry about than violence. An epic, man-made famine is already gripping the country. Opposing forces more often hit civilians rather than one another. In South Sudan, they have raided cattle and burned homes and fields. Because so many have been forced to flee, people cannot plant crops or must abandon them. About 100,000 people face immediate starvation and more than 1 million are in danger.

Tibi and the South Sudan Council of Churches are working on creating a peace conference. “We will invite all the ethnic groups that are tearing the country apart,” he said. “We will try to build peace from the grassroots upward.”

Tibi is grateful that his clerical collar gives him access to places where others cannot go. His collar does not deflect bullets, but he rarely thinks about that. His mind is focused on peace.

To donate to the South Sudan Education and Peacebuilding Project, go to presbyterianmission.org/donate/e052172-1. Presbyterian Disaster Assistance (PDA) is helping with famine relief and other problems caused by the violence. To donate to PDA’s work in South Sudan, go to pma.pcusa.org/donate/make-a-gift/gift-info/DR000042.

Merciful Father, Son and Holy Spirit, embrace your witnesses in South Sudan, protecting them and giving them courage for this day. May we have the power to comprehend, with all the saints, the breadth, length, height and depth of your love expressed through them. Amen.