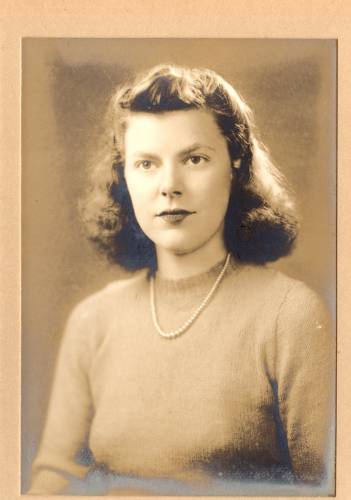 Matilda Cartledge as a young professor (circa 1950).

While sorting through the papers of her late cousin Matilda Cartledge, Rebecca McClure found a couple of sentences in her relative’s handwriting that she says reflect Cartledge’s values.

The unattributed sentences, which are a quote from President Franklin Roosevelt’s second inaugural address, read: “The test of our progress is not whether we add to the abundance of those who have much. It is whether we provide for those who have too little.”

Even after her death, Cartledge models her commitment to people in need. She left the Presbyterian Mission Agency $2 million and directed that it be equally divided between Presbyterian Disaster Assistance and Self-Development of People. She died Dec. 20 at age 96 in Black Mountain, North Carolina.

Prior to moving to North Carolina in retirement, she taught biology for many years at Berea College in Berea, Kentucky, a tuition-free school that serves students primarily from Southern Appalachia. Previously, she taught religion at Millsaps College in Jackson, Mississippi, and the Presbyterian-related Maryville College in Maryville, Tennessee. Cartledge earned two graduate degrees — one in theology from Princeton Theological Seminary and another in biology from the University of Tennessee.

McClure describes her cousin as a devoted Presbyterian who had a keen interest in social justice. She notes that one of the causes that captured her cousin’s passion was the movement to help people flee political repression in Central America in the 1980s. It was a fervor that Cartledge shared with her sister, Louisa, who died in 2011. “They were very, very interested in helping people get out of Nicaragua,” McClure said. 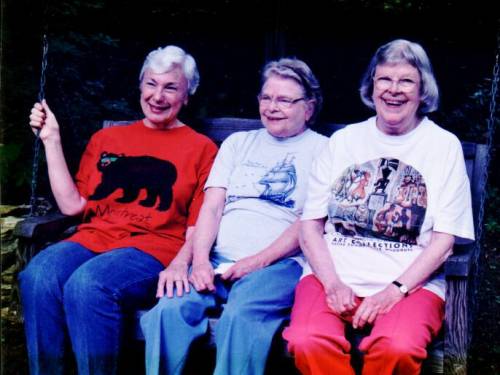 Matilda Cartledge (right) with her sister, Louisa (center), and their cousin Rebecca McClure in the early 2000s.

The Cartledge sisters grew up in a family of staunch Presbyterians. They had a grandfather, uncle and cousin who were Presbyterian ministers. Their father, Groves Howard Cartledge, was a chemistry professor and researcher who also had a love for theological inquiry. That interest resulted in an invitation for him to deliver the Smyth Lectures at Columbia Theological Seminary, where his brother, Samuel, taught for many years, according to the Rev. Douglas Vaughan, a Cartledge cousin.

Vaughan, like McClure, remembers the sisters as justice-minded Presbyterians whose concern for others reached well beyond the U.S. border. “The only time I can remember them criticizing the Presbyterian Church or their congregation is when they didn’t do enough for mission around the world.” He said they were “cutting edge” and they applauded progressive actions taken by the General Assembly.

In her final years, Matilda Cartledge moved to a retirement center in North Carolina. At her request, her memorial service was a simple remembrance of her life during regular Sunday worship at her church, Black Mountain Presbyterian.

“She was always a brilliant, caring person with a wonderful, delicious sense of humor,” McClure said. “She always lived beyond herself. Up into the very end, even when her health was deteriorating, she was reaching out to others. She had a lust for life that lasted until the end.”

Sara Lisherness, director of the Presbyterian Mission Agency’s Compassion, Peace and Justice (CPJ) ministry area, praised Cartledge for her generosity and her faithful witness. “In CPJ, we strive to live out Scripture’s call in Isaiah 58 to be ‘repairers of the breach.’ Matilda Cartledge spent a lifetime seeking to repair the breaches caused by injustice, and through this gift she continues that work even after her death. We are extremely grateful for her gift, and we are honored to use it in pursuit of God’s justice around the world.”

Gracious God, we give you thanks for allowing us to take part in building a kingdom in which all people are equal. Amen.