Herman Kumara to share struggles of fighting systems of oppression 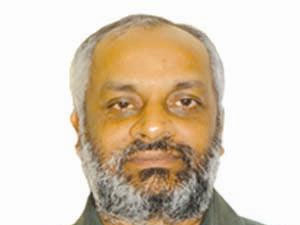 When the International Peacemakers begin their visits this fall in the U.S., churches will have a chance to hear about the life struggles of the people in Sri Lanka. Herman Kumara is a human rights defender who works primarily with food producers, specifically in small-scale, marginalized fishing communities. He provides policy analysis with rights-based and gender-sensitive approaches and measures the vulnerability of marginalized groups.

An island country in south Asia, Sri Lanka is a very diverse country with many ethnic groups and religions. Kumara learned early in life that challenging the system can come with a price. He became a student activist at the University of Peradeniya and quickly engaged in social justice issues.

“During my time at the university, there were numerous killings in the country, estimated to be around 60,000, including many youth,” Kumara said. “We narrowly escaped these as we were actively engaged in political movements that went against the politics of the university. In 1987, I narrowly escaped death with the threat to my life and proceeded to continue my studies.”

Later, Kumara joined Caritas Sri Lanka, part of the Catholic Bishops’ Conference of Sri Lanka, with a focus on the economic imbalance in the country. However, he says his campaigns against neo-liberal economic policies drew criticism from leadership.

“My superiors asked me to stop mobilizing the communities, but by that time, the movement to fight the neo-liberal economic policies was already underway,” he said. “I had to make a decision either to obey the superiors or to continue the struggle initiated. I decided to continue to work with the people and left Caritas in 1997.”

Kumara says they’ve lived in the midst of civil war for more than 30 years with little opportunity for people to express their frustrations or views about life and oppression.

“Once the people came out against privatization and other governmental policies, the government crushed the people’s voice through police and military or paramilitary groups,” Kumara said. “Media smear campaigns were launched against us and projected us as the threat to the country. This was followed by continuous government monitoring and surveillance.”

Kumara says he and supporters were threatened and intimidated, making his work “very tense and limited.”

“The government accused my organization of aggressive agitation and attempted to abduct me three times,” he said. “Again, I narrowly escaped and stayed in Europe for two months, returning to work to fight against brutal rulers. Finally, we were able to evict the dictator and establish a so-called good governance government.”

Kumara says the south Asian region is one of the most poverty-stricken regions in the world, with an estimated 840 million people dealing with hunger.

“The social evils are severe in the region. The religious and racial fundamentalism are major threats to the region’s progressive development and peace,” Kumara said. “Respect towards women and girls is seriously low, and violence against women is a prevailed reality in the region. Domestic violence is hardly addressed, as it is taken for granted as a cultural matter of the family.”

Kumara added that health and education are serious issues, and malnutrition is severe in the region.

Kumara is one of 16 International Peacemakers who will be visiting U.S. churches and institutions between Sept. 22 and Oct. 16. The visits are sponsored by the Presbyterian Peacemaking Program.

“I shall tell U.S. citizens of the work we do amidst the difficulties, both security-wise and economically,” Kumara said. “We, the Sri Lankans, do not have a directly linked U.S. network for support, and our people are becoming poorer because of the policies adopted by our country’s government.”

Kumara says he not only wants to share what is going on in Sri Lanka, but hopes to learn from U.S. congregations as well.

“Once we know each other’s concerns, issues, challenges and threats, it is easier to link and work closely,” he said. “I want to tell what our situation is openly and seek possible assistance in whatever possible way to resolve our struggles.”